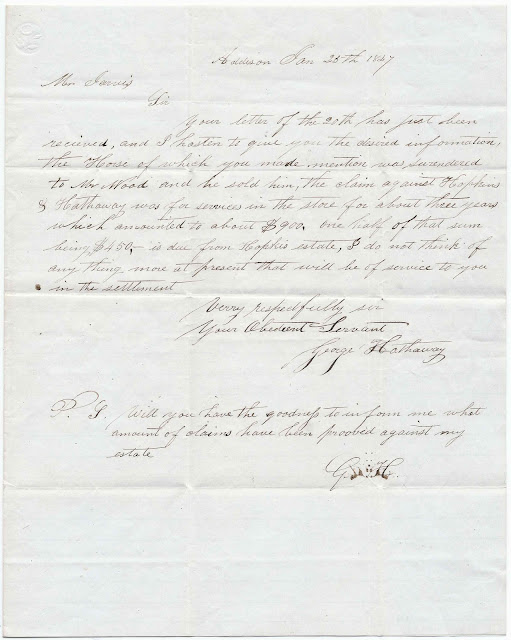 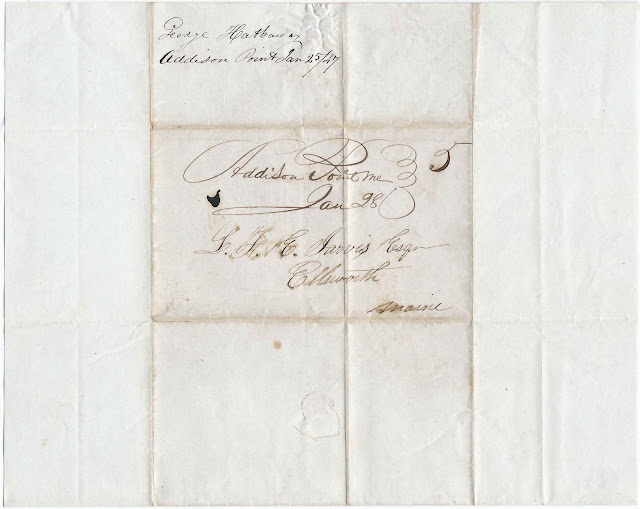 Your letter of the 20th has just been received, and I hasten to give you the desired information.  The Horse of which you made mention was surrendered to Mr. Wood and he sold him.  The claim against Hopkins [vs ?] Hathaway was for services in the store for about three years which amounted to about $900, one half of that sum being $450, - is due from Hopkis [sic] estate.  I do not think of anything more at present that will be of service to you in the settlement.

P.S.  Will you have the goodness to inform me what amount of claims have been proved against my estate.  G.H.

George Hathaway, a merchant and trader, was born 29 May 1805 at Conway, New Hampshire, the son of Ebenezer and Betsey (Tisdale) Hathaway.  On 30 May 1839 at Addison, Maine, George Hathaway married Miriam P. Nash, daughter of Capt. Holmes Nash and Mary Polly (Drisko) Nash.  Miriam was born 2 January 1819 at Addison, Maine.  I believe they had two sons, both of whom died young.  George died 15 July 1882 at Somerville, Massachusetts.  Miriam died 1 February 1903 at Winchester, Massachusetts.

Leonard Fitz-Edward Jarvis was born 23 August 1819 at Surry, Maine, son of Edward Scott Jarvis and Elizabeth Sparhawk (Spooner) Jarvis.  He was a Bowdoin College graduate, an attorney, a postmaster, a Democrat politician and a horticulturalist.  He married Mary A. Robinson, who was born at Ellsworth, Maine, on 1 May 1832.  She died 28 December 1863 at Columbia, California.  Leonard died 2 March 1906 at Oakland, California.

If you have corrections to the information above, or additional information on George Hathaway and Leonard Fitz-Edward Jarvis, Mr. Wood and Mr. Hopkins, please leave a comment or contact me directly.

Posted by Pam Beveridge at 7:55 AM