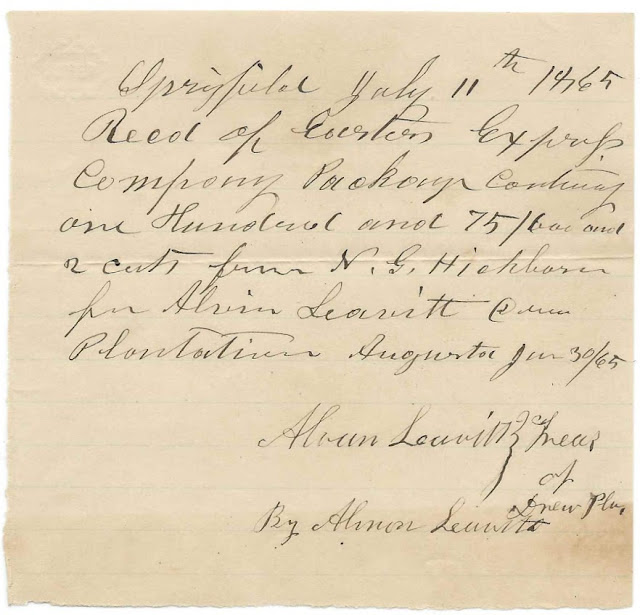 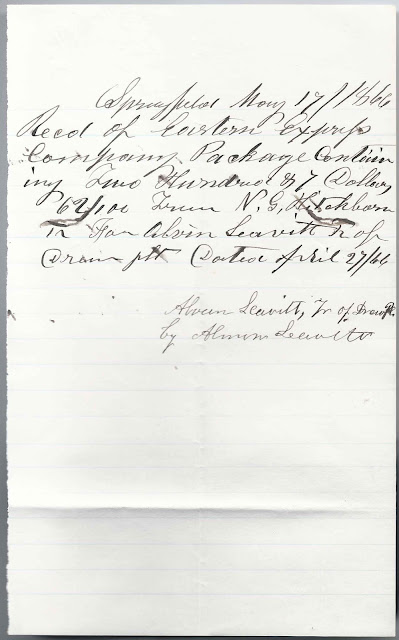 Almon Leavitt was born 12 April 1837 at Turner, Maine, the son of Alvin and Susannah Leavitt.  My research shows that Alvin Leavitt was the son of Isaiah Leavitt and Lydia (Ludden) Leavitt.  I'm not sure where the use of Jr. came in.

Sometime between the enumeration of the 1850 and 1860 Census, Alvin, Susannah and their children moved north to Penobscot County in the area of the town of Springfield.  In the 1860 Census, Alvin was farming, and two of his sons, one of them Almon, were teaching school.  Alvin died in 1868 and is buried at Turner, Maine.

On 8 January 1870, Almon married Elsie Kyle Gordon, daughter on Alford and Elsie (Kyle) Gordon.  Elsie was born about November 1848 at Winn, Maine.  Almon and Elsie would have, I believe, three children:
Almon operated a tannery, a shingle mill and a steam mill and served as a town clerk at Kingman Township; it's likely that his father was also involved in these ventures.

As for N. G. Hitchborn, I'm not sure who he was, but there was a Nathan G. Hichborn who ran a store and shipyard at Stockton, Mainer.  Just before the year of this document, he was elected Treasurer of the State of Maine, but I assume his business interests carried on.  It's possible that this was a transaction with the State of Maine or perhaps it reflected an order for the store or shipyard.

If you have corrections and/or additions to the information above, please leave a comment or contact me directly.   Thanks for stopping by!

Kingman Township, Maine [A] and Drew Plantation [B]