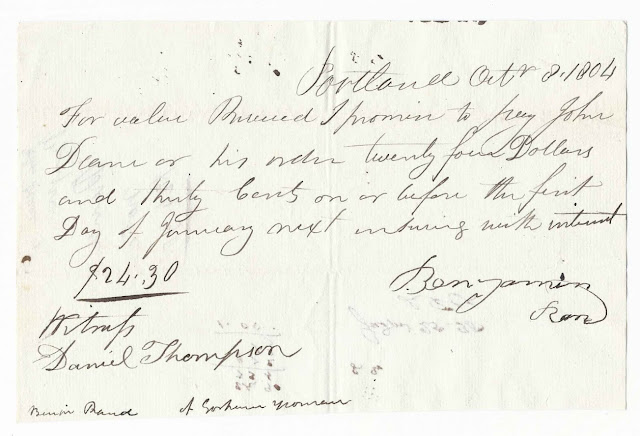 October 8, 1804 document written at Portland, Maine, where Benjamin Rand, "A Gorham Yeoman", promised to pay John Deane $24.30 on or before the first Day of January next.  The transaction was witnessed by Daniel Thompson.

By 1786, John Deane had moved to Standish, Maine, where he was elected moderator at the first election there after the town's incorporation in 1785, and where he performed the first marriage at Standish, between Sargent Shaw and Annie Tompson, on 14 September 1786.

John and Miriam Dean had at least one child, a daughter Miriam, born 6 January 1878.  She married Enoch Freeman Higgins.  John's wife Miriam died in 1791, so it's possible that he was the John Deane of Standish, Maine, who married Mary Jewett at Newburyport, Massachusetts on 20 June 1793.

John Deane served as Justice of the Peace for Cumberland County, Maine.  He died at Standish, Maine on 6 May 1826.

If these Standish men are the men named in the document, they may have had business at Portland, and made the document while there.  Perhaps the Standish John Deane was at Portland because of his work as a Justice of the Peace.

If you have corrections and/or additions to the information above, or an alternate theory as to the identity of one or more of these men, please leave a comment or contact me directly.  Thanks!