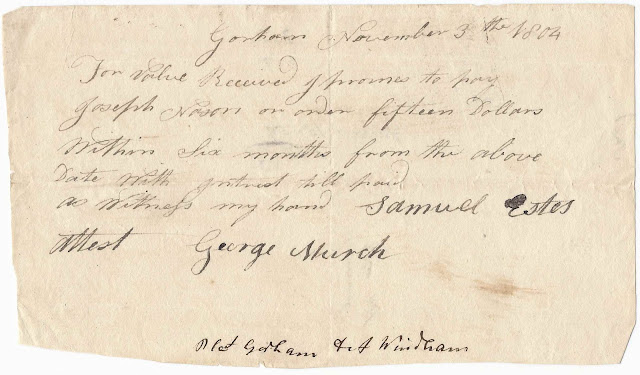 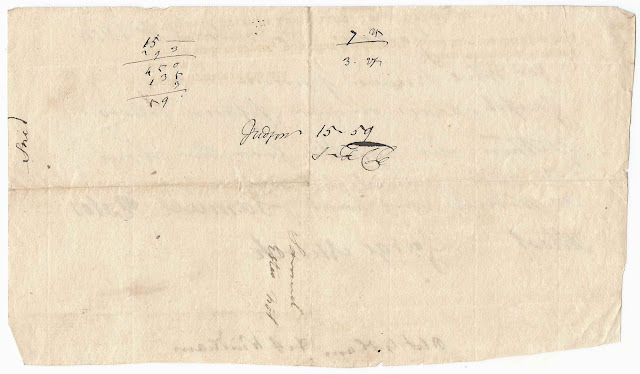 Gorham, November 3, 1804
For value Received I promise to pay Joseph Nason or order fifteen Dollars Within Six months from the above Date with interest till paid.
As Witness my hand, Samuel Estes
Attest, George Murch

I'm not sure which Samuel Estes it was who signed this document.  There was a Samuel Estes who died at Windham, Maine, on May 22, 1817, according to a transcription of cemetery records at the Windham, Maine, Historical Society, though most online trees note that he died in 1818, so I'm not sure if one or the other was a transcription error.  This Samuel Estes was born 8 December 1751 at Berwick, Maine, son of Henry and Mary (Varney) Estes.  He married Eunice Cobb; they had a large family.

George Murch may have been the George Albert Murch who was born 8 February 1767 at Gorham,  Maine, son of John and Anna (Dean) Murch.  That George married Hannah Roberts on January 1, 1791 at Gorham, Maine.

If you have information on any of these men, please leave a comment.  Thanks!

Posted by Pam Beveridge at 4:44 PM