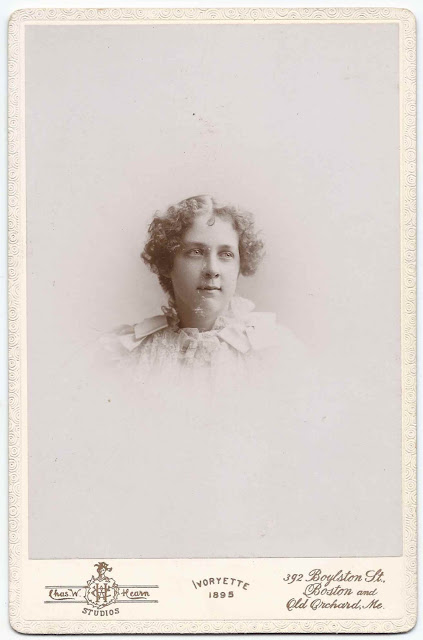 1895 graduation photograph of Blanche Lillian Libbey, at her graduation from East Boston High School at Boston, Massachusetts.  The photograph was taken at the Charles W. Hearn studio at either 392 Boylston Street, Boston, or Old Orchard Beach, Maine.
The area of discoloration around her face is from my scanner, not the photograph itself. 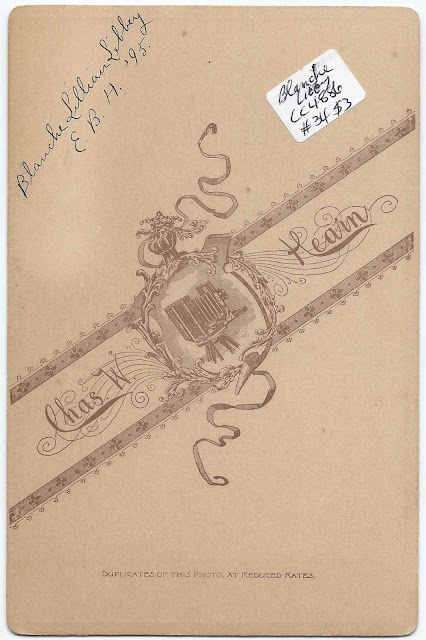 Blanche Lillian Libbey was born about May 1876 at Bangor, Maine, the daughter of John Henry Libbey and Augusta A. (Stubbs) Libby, "Gussie", who were also born in Maine.  Blanche spent her grammar and high school years at East Boston, Massachusetts.  She's listed here in the Annual Report of the School Committee of the City of Boston,  1895.

Listed with Blanche is Ethel Louise Parker, whose graduation photograph is featured in another post.

The 1900 Census of Boston lists Blanche, her parents and her brother Harry; no occupation is listed for Blanche.

The couple settled first at Boston, Massachusetts, and later at nearby Winthrop, Massachusetts.  They had a daughter Lillian Wood Pigeon, born in 1907.  Blanche's widowed mother, Augusta A. (Stubbs) Libbey, lived with Blanche and Roy, until her death.

If you have corrections and/or information to share, please leave a comment for the benefit of other researchers.
View Larger Map
Posted by Pam Beveridge at 12:55 PM