Photograph of an Older Man Identified as John Skillin of Bangor, Maine or the area 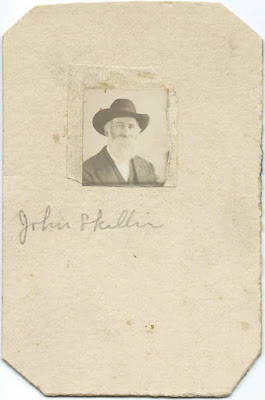 Small photograph of an elderly man identified as John Skillin, with further identification on the reverse showing that John was from Bangor, Maine, or the area, or that the photography studio was located at Bangor. He was presumably John W. Skillin; another photograph features a photograph of his son Harry Alfred Skillin.

John and Jennie had at least four children.  One was the aforementioned Harry Alfred Brown, who was born June 5, 1889 at Kenduskeag, Maine.   Another was Susan Rachel (Skillin) Kendall, who became the fourth wife of Ora Crosby Knapp and stepmother to his daughter Leda Burrill Knapp.

If you have corrections and/or additions to the information above, or you feel that the John Skillin in the photograph is not the John W. Skillin described above, please leave a comment or contact me directly.

Posted by Pam Beveridge at 9:54 AM