58 Documents Relating to the Parlin Family of the Bingham, Maine area - mostly 1840s 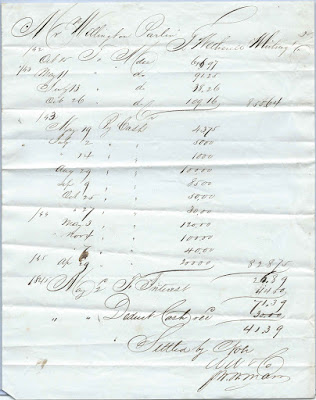 Collection of 58 documents that relate to the Parlin family of the Bingham, Maine, area.  Many documents share a time frame, which seems to indicate that a member of the family traveled to Boston occasionally to arrange a resupply of goods.

The family members include:

The document above covers the years 1842-1845 and details the business transactions between Wellington Parlin, who operated a store at Bingham, Maine, and Wetherell & Whitney, a dry goods business at 59 Kilby Street, Boston, Massachusetts.  The document was signed by John W. Wetherell.  Most of the documents pertain to Wellington Parlin.

The document below, dated April 30, 1845, is a receipt whereby the Robinson & Wilder Company of Boston, Massachusetts, received $50 from Parlin & Heald.

Stephen Parlin was born in 1789 at Norridgewock, Maine, son of Silas Parlin and Lydia (Wood) Parlin.  Stephen married Elizabeth Fletcher of Norridgewock in 1810.  Their children:
If you have corrections, additions and/or clarifications to the information above, please leave a comment of contact me directly.

I tried to put Concord Township on the map below, but somehow it ended up on the wrong side of the Kennebec River.