Cabinet Photograph of Nellie Mae Balano at Age 11-1/2; by a Rockland, Maine studio 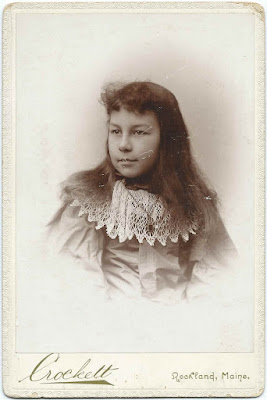 Cabinet photograph of Nellie Mae Balano at the age of 11-1/2 years.  The photograph was taken by the Crockett studio of Rockland, Maine. 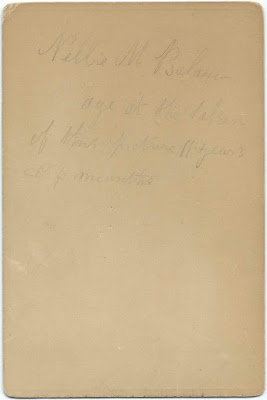 Hugh Augustus Merrill attended Bowdoin College and became a newspaper reporter and editor on various Maine periodicals, including the Portland Daily Argus at Portland, the New Age at Augusta and the Rockland Messenger at Rockland.  He was also interested in history and genealogy and wrote on those subjects, including the "Hero of Westcustogo", [now known as North Yarmouth, Maine], included in the Maine Historical and Genealogical Recorder, Volume 9, dated 1898.

The couple lived in various Maine cities as Hugh Augustus pursued his newspaper career; I didn't find a record of any children for them.  By 1958, Nellie was living at Portland, Maine, where she's noted as a widow in the City Directory of that year.

If you have corrections and/or additions to the information above, or if you believe Nellie M. Balano to be a different person, please leave a comment or contact me directly.