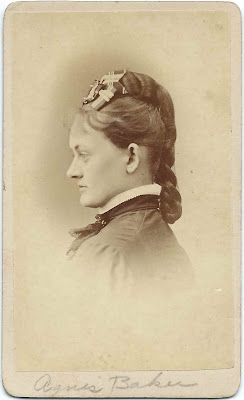 Update of February 2, 1016:  Regarding Agnes' death at Idaho Springs, Colorado, an historian has informed me that Idaho Springs was known for its healing waters.  Many well-to-do families sent their ailing members there as a last resort, and this may have been why Agnes happened to have died there.

Carte de Visite of a woman identified on the reverse, in contemporary handwriting, as Agnes Baker of Baker Hill, Waterford, Maine.  The CDV was created by the studio of J. U. P. Burnham of Norway, Maine. 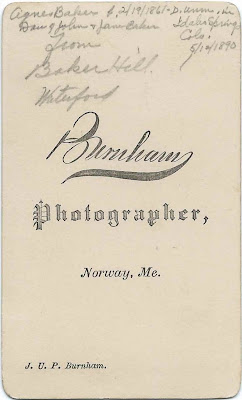 Agnes Maria Baker was born at Waterford, Maine, on February 19, 1861, the daughter of John Newton Baker and Jane M. (Plummer) Baker.  Agnes was living with her parents at Waterford at the time of the 1880 Census, when she was described as 19 years old with no occupation listed.

[See note of February 2, 2016 above]  I'd be very interested to know how she subsequently happened to find herself in Colorado, where she died at Idaho Springs, on May 12, 1890.  I found some settlers by the name of Baker who established a ranch at Idaho Springs, but they came from Ohio.  Perhaps, though, their ancestors had come from Maine.

Posted by Pam Beveridge at 2:38 PM