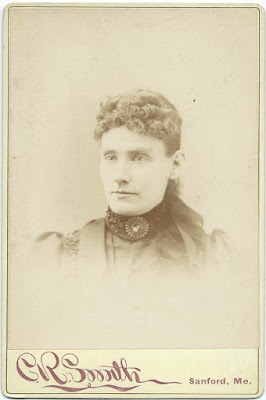 Cabinet photograph of a woman identified on the reverse as Abbie Wilson.  The photograph was taken by the studio of C. R. Smith of Sanford, Maine.  She may have been Abbie Jane (Hobbs) Wilson, wife of Frank Wilson. 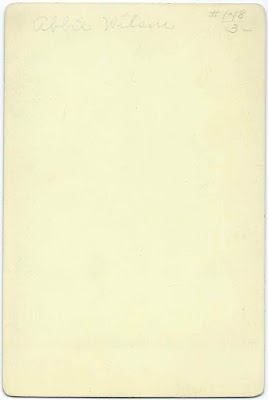 If the woman in the photograph is Abbie Jane (Hobbs) Wilson, she was born June 1, 1859 at Waterboro, Maine, the daughter of Benjamin Franklin Hobbs and Ruth (Tibbetts) Hobbs.

I found Abbie's birth date and death date in The Hamiltons of Waterborough (York County, Maine): Their Ancestors and Descendents, 912-1912, by Samuel King Hamilton and published in 1912.  Hopefully the information is correct.

Abbie and Frank lived at Sanford, Maine, where Frank worked as an attorney.  The History of Sanford, Maine 1661-1900 by Edwin Emery, published in 1901, contains a short biography of Frank Wilson.

Frank, his two wives and other family members are buried in the Oakdale Cemetery at Sanford, Maine.  If you have corrections and/or additions to the information above, please leave a comment or contact me directly.