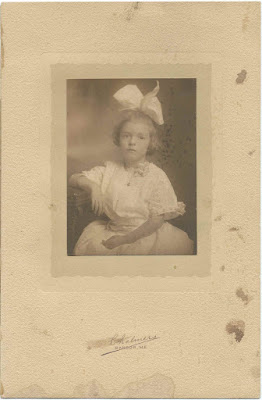 c1912 Photograph of a young girl presumed to be Thelma Iva Bagley of East Corinth, Maine, as the name of her mother, Florence Eugenie (Washburn) Bagley appears on the reverse of a protective jacket as Mrs. W. E. Bagley of E. Corinth.  I believe Thelma, born in 1906, was Florence's only child.

The photograph was taken by the Chalmers studio of Bangor, Maine. 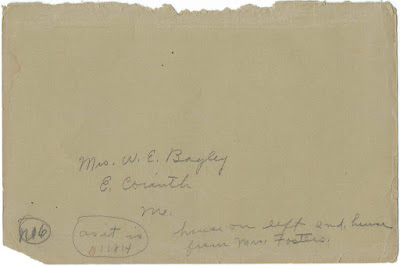 Thelma Iva Bagley was born July 18, 1906 at Corinth, Maine, the daughter of station agent Wallace Edwin Bagley and Florence Eugenie (Washburn) Bagley.  On August 20, 1940, at Dover, New Hampshire, Thelma married Myron Bickford Foster, son of Russell Maurice Foster and Lilla Eva (Brown) Foster.  Myron was born in 1901 in Maine.  I believe he was previously married to Rhoda E. Mitchell, who died not long after their marriage.

Posted by Pam Beveridge at 7:34 AM