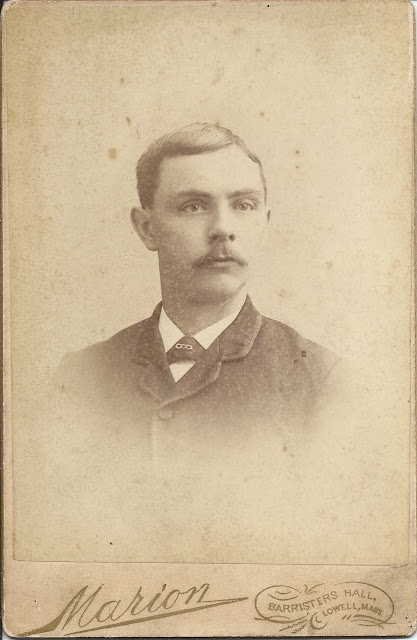 Separate cabinet photographs of Mr. and Mrs. C. L. Hodge of Dracut, Massachusetts, with identifications on reverse.   The photograph above was taken by the Marion studio of Barristers Hall, Lowell, Massachusetts.

One troubling aspect, however, is that there appear to have been two Charles Hodges, of about the same age, in the Dracut/Lowell area, one the son of Lyman and Berintha Ann (Bickford) Hodge, and the other the son of John and Mary Hodge.

Adding even more confusion, their marriage record on Ancestry.com has the parents of Charles L. Hodge and Ida M. Hutchinson indexed erroneously as the parents of the couple on the line above them.  Thankfully, I've learned that it pays to view the original document, whenever possible. 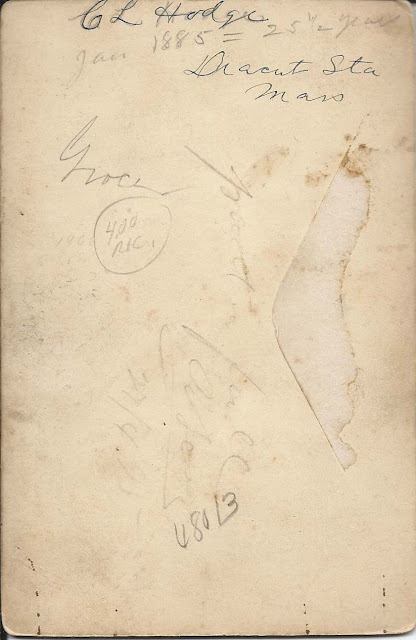 The reverse of the photograph, above, indicates that the photograph was taken in January 1885, when C. L. Hodge was 25-1/2 years old. 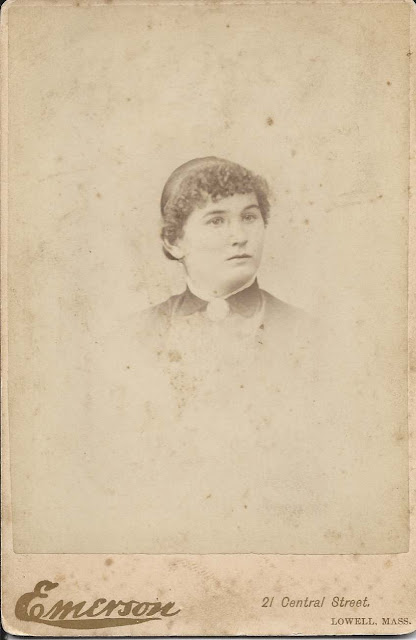 Above, Mrs. C. L. Hodge; photograph, taken by the Emerson studio of 21 Central Street, Lowell, Massachusetts.  The information on reverse shows the photograph was taken in 1885, when Mrs. Hodge was 21 years old. 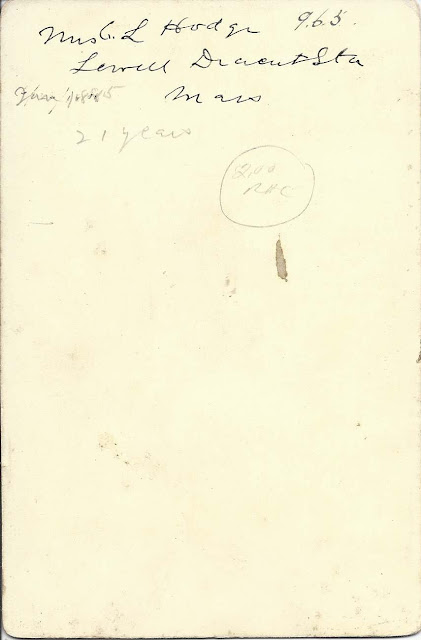 From online research, hopefully correct, and hopefully with the correct Mr. and Mrs. C. L. Hodge, who I believe were Charles L. and Ida M. (Hutchinson) Hodge:   [corrections welcome!]

On 5 October 1884 at Lowell, Massachusetts, Charles L. Hodge married Ida M. Hutchinson, a Nova Scotia native, the daughter of John and Rebecca (Burbidge) Hutchinson.  Ida was born about 1865.  She emigrated to Massachusetts in the 1880s.

Charles L. and Ida M. (Hutchinson) Hodge raised a family of at least two children at Dracut, Massachusetts.  Ida's obituary in the Lowell Courier Citizen issue of 27 August 1937, below, shows that she outlived her husband and her daughter.

"MRS. IDA MAY HODGE
Mrs. Ida May (Hutchinson) Hodge, a resident of Dracut, Mass. for


more than 50 years, died yesterday morning at her home, 71 Sladen
Street. She was the widow of Charles L. Hodge. She is survived by one
son, Herman L. Hodge of Dracut; two sisters, Mrs. Annie E. Shaw of
Dracut and Mrs. Jennie Dorman of Hantsport, N. S.; three brothers, John
A. Hutchinson of Lowell, Albert Hutchinson of Methuen and Walter
Hutchinson of Halifax, N. S., and two grandchildren. She was a member
of the Dracut Hillside Congregational Church. The body was removed to

If you have any corrections to the information above or if you feel that the people pictured are a different C. L. Hodge and wife, please leave a comment or contact me directly.