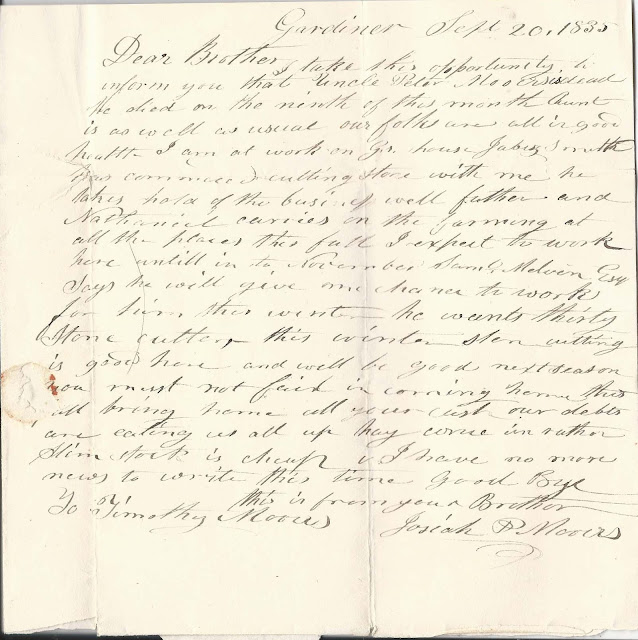 20 September 1835 letter mailed from Gardiner, Maine, by Josiah Prescott Mooers to his brother Timothy Mooers at New York City, to advise Timothy of the death of their uncle, Peter Mooers, on 9 September 1835.  Transcript below.

Josiah moved to Maine when in his early thirties and then to Minnesota in 1852.   In 1856 he settled at Mooers Prairie, now called Cokato, where he became a noted citizen.  Read about the settling of Cokato here and see a wonderful photograph of Josiah Prescott Mooers and wife Rachel (Peterson) Mooers here.

His parents Nathaniel and Betsey (Prescott) Mooers had twelve or more children.  Another son, Samuel, had a granddaughter, Clara Augusta Hoyt, who was adopted by Josiah and his wife.

In Philadelphia in October 1832, Josiah Prescott Mooers married Rachel Peterson, who was born in New Jersey on 16 January 1815.
They had three children of their own, and they adopted Josiah's niece:

Timothy Mooers was born 18 September 1809 at Vienna, Maine, also the son of Nathaniel and Elizabeth (Prescott) Mooers, "Betsey".  Timothy married Mariah Conover in New York City in February 1837.  They had seven children:
Peter Mooers, whose death was the subject of Josiah's letter to Timothy, was born 13 December 1751 at Candia, New Hampshire, the son of Samuel and Mehitable (Ingalls) Mooers.

Peter and Mary (Varnum) Moores had seven children, all apparently born at Candia, New Hampshire, before the family moved to Vienna, Maine:
If you have any corrections or additions to any of the information presented above, please leave a comment or contact me directly.  Thanks!

Gardiner, Sept. 20, 1835
Dear Brother,
I take this opportunity to inform you that Uncle Peter Mooers is dead.  He died on the ninth of this month.  Aunt is as well as usual. Our folks are all in good health.  I am at work on G's house.  Jabez Smith has commenced cutting there with me.  He takes hold of the business well.  Father and Nathaniel carries on the farming at all the places this fall.  I expect to work here until into November.  Samuel Melvin, Esq., says he will give me chances to work for him this winter.  He wants thirty stone cutters this winter. ___cutting is good here and will be good next season.  You must not fain in coming home this fall.  Bring home all your cash.  Our debts are eating us all up.  Hay come in rather slim.  Stock is cheap.  I have no more news to write this time.  Good Bye,
To Timothy Mooers
This is from your Brother, Josiah P. Mooers