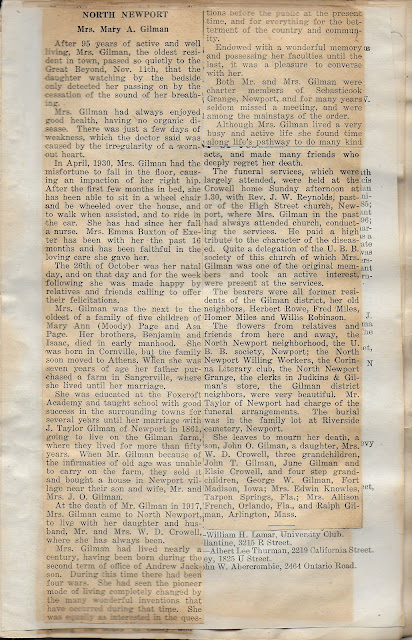 Found pasted in a scrapbook with items mostly from the Dexter, Maine, area, and Skowhegan, Maine, area.

Mary A. (Page) Gilman was born in 1836, the daughter of Asa Page and Mary Ann (Moody) Page of Cornville, Maine, who later moved the family to Athens, Maine and then to Sangerville, Maine.  She attended Foxcroft Academy and subsequently taught in area schools until her marriage to John Taylor Gilman of Newport in 1861.

For the next 50 years, she and her husband lived on the Gilman farm in Newport.  When the farm became too much for them to manage, they moved to Newport village near their son, John Orman Gilman (1869-1955) and his family.  After John's death, Mary moved to North Newport to be with her daughter, Annie Mildred (Gilman) Crowell (1873-1969), widow of Wilson Daniel Crowell (1868-1925) and family.

John Taylor Gilman, wife Mary A. (Page) Gilman, their daughter and son and other family members are buried in the Riverside Cemetery at Newport, Maine.

After 95 years of active and well living, Mrs. Gilman, the oldest resident in town, passed so quickly to the Great Beyond, Nov. 11th, that the daughter watching by the bedside only detected her passing on by the cessation of the sound of her breathing.

Mrs. Gilman had always enjoyed good health, having no organic disease.  There was just a few days of weakness, which the doctor said was caused by the irregularity of a worn-out heart.

In April 1930, Mrs. Gilman had the misfortune to fall in the floor, causing an impaction of her right hip. After the first few months in bed, she has been able to sit in a wheel chair and be wheeled over the house, and to walk when assisted, and to ride in the car.  She has had since her fall a nurse. Mrs. Emma Buxton of Exeter has been with her the past 16 months and has been faithful in the loving care she gave her.

The 26th of October was her natal day, and on that day and for the week following she was made happy by relatives and friends calling to offer their felicitations.

Mrs. Gilman was the next to the eldest of a family of five children of Mary Ann (Moody) Page and Asa Page. Her brothers, Benjamin and Isaac, died in early manhood. She was born in Cornville, but the family soon moved to Athens. When she was seven years of age, her father purchased a farm in Sangerville, where she lived until her marriage.

She was educated at the Foxcroft Academy and taught school with good success in the surrounding towns for several years until her marriage with J. Taylor Gilman of Newport in 1861, going to live on the Gilman farm, where they lived for more than fifty years. When Mr. Gilman because of the infirmaties [sic] of old age was unable to carry on the farm, they sold it and bought a house in Newport village near their son and wife, Mr. and Mrs. J. O. Gilman.

At the death of Mr. Gilman in 1917, Mrs. Gilman came to North Newport, to live with her daughter and husband, Mr. and Mrs. W. D. Crowell, where she has always been.

Mrs. Gilman had lived nearly a century, having been born during the second term of office of Andrew Jackson. During this time there had been four wars. She had seen the pioneer mode of living completely changed by the many wonderful inventions that have occurred during that time. She was equally as interested in the questions before the public at the present time, and for everything for the betterment of the country and community.

Endowed with a wonderful memory and possessing her faculties until the last, it was a pleasure to converse with her.

Both Mr. and Mrs. Gilman were charter members of the Sebasticook Grange, Newport, and for many years seldom missed a meeting, and were among the mainstays of the order.

Although Mrs. Gilman lived a very busy and active life she found time along life's pathway to do many kind acts, and made many friends who deeply regret her death.

The funeral services, which were largely attended, were held at the Crowell home Sunday afternoon at 1.30, with Rev. J. W. Reynolds, pastor of the High Street church, Newport, where Mrs. Gilman in the past had always attended church, conducting the services. He paid a high tribute to the character of the diseased [sic]. Quite a delegation of the U. B. B. society of this church of which Mrs. Gilman was one of the original members and took an active interest, were present at the services.

The bearers were all former residents of the Gilman district, her old neighbors, Herbert Rowe, Fred Miles, Homer Miles and Willis Robinson.

The flowers from relatives and friends from here and away, the North Newport neighborhood, the U.B.B. society, Newport; the North Newport Willing Workers; the Corinna Literary club, the North Newport Grange, the clerks in Judkins & Gilman's store, the Gilman district neighbors, were very beautiful. Mr. Taylor of Newport had charge of the funeral arrangements. The burial was in the family lot at Riverside cemetery, Newport.

She was spending the day very quietly when Leola and Lena Cochran, nearby neighbors' daughters, came bringing a box of gifts. They had but gone when relatives from Pittsfield, Mrs. Lettie M. Robinson, Mr. and Mrs. T. E. Getcheell [sic] and Mr. and Mrs. Daniel R. Getchell, came in their car, bringing felicitations and gifts.  A little later, her son and family, Mr. and Mrs. J. O. Gilman, John T. Gilman and June Gilman also Mrs. Maude Jones of Newport came with their presents and good wishes. The unexpected thoughtfulness of the relatives and friends coming to vissit [sic] her and their gifts, made Mrs. Gilman very happy.

As Mrs. Gilman's grandson, Elliot Crowell's birthday is Oct. 24th, it has always been the custom in the family to combine the dates and have a birthday supper the 26th.  As Elsie Crowell, who is at the U. of M. could not home until Saturday night, Oct 27th, the supper was deferred until then.

The table was very attractive in pink and white, with streamers of pink crepe paper extending from the ceiling to each plate. On the pink centerpiece was a bouquet of carnations, the gift of Mrs. T. E. Getchell of Pittsfield, to Mrs. Gilman.

After a Thanksgiving dinner, the two birthday cakes with lighted pink candles were brought in. One cake was made by Mrs. Maude Jones of Newport for Mrs. Gilman and one made by Mrs. Crowell for Elliot Crowell. Then oranges, peanuts, grapes, fancy cookies, jelly, fudge and chocalotes [sic] the gifts of both from Mrs. Robinson, J. O. Gilman and family, Mrs. Crowell and Elsie Crowell, were enjoyed.  Other gifts and cards sent by friends were then presented, thus making the second happy day for Mrs. Gilman.

Mrs. Gilman's health is as good as one might expect for her years. She is mentally alert to all the doings of the day. She is keenly interested in politics, and always has been one of the first to cast a vote since women were eligible to the ballot. She is a very strong Republican and is hoping to be able to cast her vote for Hoover Tuesday.

Mrs. Gilman was born in Cornville October, 26, 1836, the second child of a family of four children of Ira [other records show his name as Asa] and Mary (Moody) Page. The family moved to Athens, where she lived until 7 years old. Then the father bought a farm in Sangerville, where the parents lived until their death. 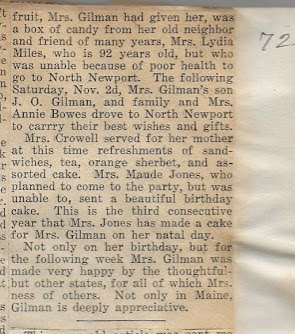 Mrs. Mary A. Gilman, one of the oldest, if not the oldest resident in the town observed her 93d birthday, Oct. 26th.

Since her husband's, J. Taylor Gilman's, death in December 1917, she has made her home with her daughter Mrs. W. D. Crowell, in North Newport, excepting occasional visits with her son, J. O. Gilman, and family of Newport village.

As Mrs. Gilman was not in her usual health from the effects of a cold only the immediate family and her grand daughter, Elsie Crowell, of the U. of M. and her classmate, Miss Anna Lyon, of Bar Harbor, who came for the week-end, enjoyed the birthday supper, prepared by Mrs. Crowell.  The large birthday cake was cut by Mrs. Gilman. She received many gifts, cards, letters and telephone messages of felicitations.

The U.B.B. Society of the High Street church, Newport, of which Mrs. Gilman is an honorary member, but who up to the time of her declining years, was an interested and active worker, sent her a beautiful bouquet of pinks and ferns.

Among the boxes of candy and fruit, Mrs. Gilman had given her, was a box of candy from her old neighbor and friend of many years, Mrs. Lydia Miles, who is 92 years old, but who was unable because of poor health to go to North Newport.  The following Saturday, Nov. 2d, Mrs. Gilman's son J. O. Gilman, and family and Mrs. Annie Bowes drove to North Newport to carry their best wishes and gifts.

Mrs. Crowell served for her mother at this time refreshments of sandwiches, tea, orange sherbet, and assorted cake.  Mrs. Maude Jones, who planned to come to the party, but was unable to, sent a beautiful birthday cake.  This is the third consecutive year that Mrs. Jones has made a cake for Mrs. Gilman on her natal day.

Not only on her birthday, but for the following week Mrs. Gilman was made very happy by the thoughtfulness of others. Not only in Maine, but other states, for all of which Mrs. Gilman is deeply appreciative.

[In the article, the last three lines were mixed up.]

If you have information on the Cochran, Crowell, Getchell, Gilman, Jones, Moody, Page, and Robinson families of Somerset County and Penobscot County, Maine, please leave a comment.