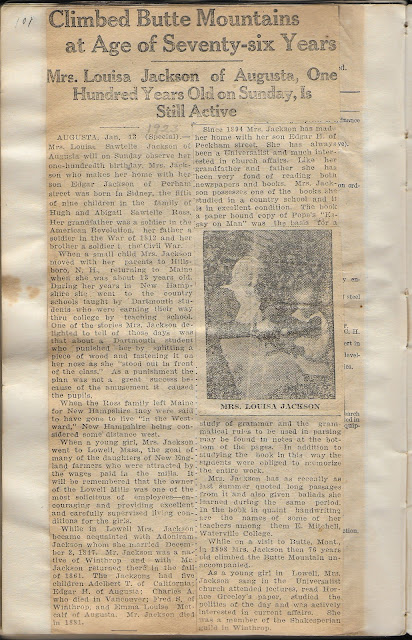 The clipping is pasted in a scrapbook of items pertaining mostly to the area encompassing Dexter,  Maine, and Skowhegan, Maine.

A transcription of the clipping appears at the end of this post.  It's pasted in a scrapbook consisting mostly of items from the area encompassing Dexter, Maine, and Skowhegan, Maine.

According to the article, Louisa's family moved to New Hampshire for a time when she was a girl, before returning to Maine when she reached the age of thirteen. Like many young women of her era, Louisa went to Lowell, Massachusetts, to work, in her case fortunately, for a mill owner who provided good working and living conditions.

While in Lowell, Louisa met Adoniram Jackson (1821-1881), whom she married on 2 December 1847.  Adoniram was a native of Winthrop, Maine, and the couple moved there to raise their family of five children:

Adoniram died in 1881.  He and Louisa are buried in the Maple Cemetery at Winthrop, Maine, with other relatives.  If you have information on the Ross, Sawtelle and Jackson families, please leave a comment.

When a small child Mrs. Jackson moved with her family to Hillsboro, N.H., returning to Maine when she was about 13 years old. During her years in New Hampshire she went to the country schools taught by Dartmouth students who were earning their way thru college by teaching school. One of the stories Mrs. Jackson delighted to tell of those days was that about a Dartmouth student who punished her by splitting a piece of wood and fastening it on her nose as she "stood out in front of the class."  As a punishment the plan was not a great success because of the amusement it caused the pupils.

When the Ross family left Maine for New Hampshire they were said to have gone to live "in the Westward". New Hampshire being considered some distance west.

When a young girl, Mrs. Jackson went to Lowell, Mass., the goal of many of the daughters of New England farmers who were attracted by the wages paid in the mills. It will be remembered that the owner of the Lowell Mills was one of the most solicitous of employees - encouraging and providing excellent and carefully supervised living conditions for the girls.

While in Lowell Mrs. Jackson became acquainted with Adoniram Jackson whom she married December 2, 1847. Mr. Jackson was a native of Winthrop and with Mr. Jackson returned there in the fall of 1861. The Jacksons had five children Adelbert T. of California; Edgar H. of Augusta; Charles A. who died in Vancouver; Fred S. of Winthrop and Emma Louise Metcalf of Augusta. Mr. Jackson died in 1881.

Since 1891 Mrs. Jackson has made her home with her son Edgar H. of Peckham Street. She has always been a Universalist and much interested in church affairs. Like her grandfather and father she has been very fond of reading both newspapers and books. Mrs. Jackson possesses one of the books she studied in a country school and it is in excellent condition. The book a paper bound copy of Pope's "Essay on Man" was the basis for a study of grammar and the grammatical rules to be used in parsing may be found in notes at the bottom of the pages. In addition to studying the book in this way the students were obliged to memorize the entire work.

Mrs. Jackson had as recently as last summer quoted long passages from it and also given ballads she learned during the same period. In the book in quaint handwriting are the names of some of her teachers, among them E. Mitchell, Waterville College. [perhaps too late to have been Edward C. Mitchell, Class of 1849 and later president of the Baptist Theological School, Paris, France; Roger Williams University, Nashville Tennesee; and Leland University, New Orleans, Louisiana]

While on a visit to Butte, Mont. in 1898, Mrs. Jackson then 76 years old climbed the Butte Mountain unaccompanied.

As a young girl in Lowell, Mrs. Jackson sang in the Universalist church attended lectures, read Horace Greeley's paper, studied the politics of the day and was actively interested in current affairs. She was a member of the Shakesperian guild in Winthrop.

Besides her children Mrs. Jackson had eleven grandchildren and many great-grandchildren. Two grandsons Winfred A. Jackson and Donald Metcalf live in Augusta while Walter A. lives in Winthrop. The others are widely scattered over the country.

By a curious co-coincidence the youngest great grand-child of Mrs. Jackson Cony Benson Metcalf will be three months old on the day before his great-grandmother is 100 years old - nearly a complete century spans the gap between the youngest and the oldest of the family.

Living quietly and contentedly Mrs. Jackson seems to those who see her with her soft, white curls, survival of the coiffure of other generations, a veritable character from a book, a character from the great book of Life who has been dignified by experience and sweetened by helpful living.