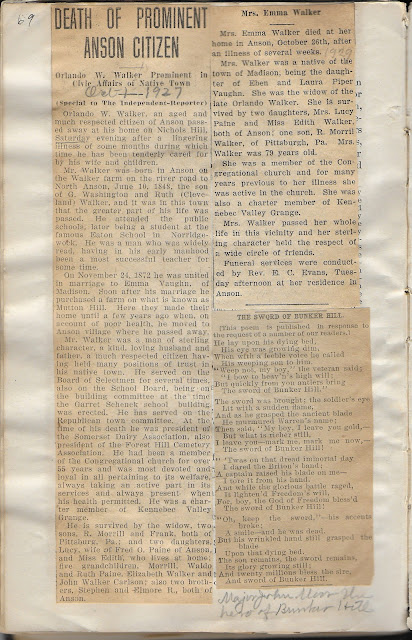 The byline hints that this obituary was first published in the Independent-Reporter, a Skowhegan newspaper that published from 1090 to 1955.

Orlando and Emma Vaughn in  married in 1872, according to Orlando's obituary and to the DAR record of their daughter, Mrs. Lucy Walker Paine.  Emma's birth date is given as 27 July 1850 in the Maine, Faylene Hutton Cemetery Collection, ca. 1780-1990.  The couple had several children, named in the obituary.

Orlando and Emma are buried in the Madison Bridge Cemetery at Madison, Maine.

Orlando W. Walker, an aged and much respected citizen of Anson passed away at his home on Nichols Hills, Saturday evening after a lingering illness of some months during which time he was tenderly cared for by his wife and children.

Mr. Walker was born in Anson on the Walker farm on the river road to North Anson, June 10, 1848, the son of G. Washington and Ruth (Cleveland) Walker, and it was in this town that the greater part of his life was passed. He attended the public schools, later being a student at the famous Eaton School in Norridgewock. He was a man who was widely read, having in his early manhood been a most successful teacher for a time.

On November 24, 1872, he was united in marriage to Emma Vaughn, of Madison. Soon after his marriage he purchased a farm on what is known as Mutton Hill. Here they made their home until a few years ago when, on account of poor health, he moved to Anson village where he passed away.

Mr. Walker was a man of sterling character, a kind, loving husband and father, a much respected citizen having held many positions of trust in his native town. He served on the Board of Selectman for several times, also on the School Board, being on the building committee at the time the Garret Schenck school building was erected. He has served on the Republican town committee. At the time of his death he was president of the Somerset Dairy Association, also president of the Forest Hill Cemetery Association. He had been a member of the Congregational church for over 55 years and was most devoted and loyal in all pertaining to its welfare, always taking an active part in its services and always present when his health permitted. He was a charter member of Kennebec Valley Grange.

He is survived by the widow, two sons, R. Morrill and Frank, both of Pittsburg, Pa.; and two daughters, Lucy, wife of Fred O. Paine of Anson and Miss Edith, who lives at home; five grandchildren, Morrill, Waldo and Ruth Paine; Elizabeth Walker and John Walker Carlson; also two brothers, Stephen and Elmore R., both of Anson.

Mrs. Emma Walker died at her home in Anson, October 26th, after an illness of several weeks.
[handwriting: 1929]

Mrs. Walker was a native of the town of Madison, being the daughter of Eben and Laura Piper Vaughn. She was the widow of the late Orlando Walker. She is survived by two daughters, Mrs. Lucy Paine and Miss Edith Walker, both of Anson; one son R. Morril Walker, of Pittsburgh, Pa. Mrs. Walker was 79 years old.

She was a member of the Congregational Church and for many years previous to her illness she was active in the church. She was also a charter member of Kennebec Valley Grange.

Mrs. Walker passed her whole life in this vicinity and her sterling character held the respect of a wide circle of friends.

Funeral services were conducted by Rev. E. C. Evans, Tuesday afternoon at her residence in Anson.

If you have information to share on the Walker, Vaughn, Cleveland and Piper families of Somerset County, Maine, please leave a comment.

Posted by Pam Beveridge at 7:59 AM