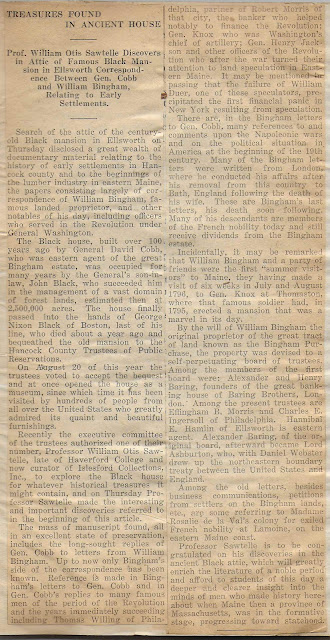 Circa 1930 newspaper clipping about the discovery by Professor William Otis Sawtelle of important manuscript items in the Black Mansion at Ellsworth, Maine, now known as Woodlawn Museum, Gardens and Park.

Read a transcription at the end of this post - with apologies to the newspaper which originally published it. I don't think it was published in the Ellsworth American, as there's explanatory information that might not otherwise have been included.  In addition, the clipping was found in the scrapbook of someone who appeared to live in either Dexter, Maine, or Skowhegan, Maine, or the area surrounding.  The Ellsworth American editor kindly gave permission, just in case, and said she doubted any other editor would not do the same.

Bingham, for whom the Bingham Purchase is named, obtained vast swarths of Maine in the 1786 lottery put on by the Commonwealth of Massachusetts and from sales by others, including General Henry Knox, whose wife inherited land from her grandfather Samuel Waldo. Read more on the Bingham Purchases here, on the website of the Colonial Society of Massachusetts, including fascinating first hand accounts of surveyors in remote regions.

Matthew Edney wrote an interesting blog post about early mapping in Maine and New England, featuring maps showing the holdings of major landowners, including Bingham, Knox and William Duer [more below] and others, and a map of the townships between the Penobscot and Schoodic Rivers [the latter name would be a major controversy in the settling of the northeastern border] being offered in a 1786 lottery by the Commonwealth of Massachusetts.

The newspaper clipping notes that the Black Mansion had recently been bequeathed to Hancock County Trustees of Public Reservations by George Nixon Black, Jr. (1842-1928), "Nixon", a descendant of General David Cobb, through his daughter Mary (1776-1851) and her husband, John Black.  The article notes that Cobb built the mansion in the late 1820s, but other sources credit the construction to John Black, which is more likely, since General Cobb, in ill health, had moved to Taunton, Massachusetts, in the early 1820s.

Subsequent to the purchase, Prof. Sawtelle, himself a member of the Hancock County Trustees of Public Reservations, had been asked by the board to search for "historical treasures" in the Black Mansion. He found a treasure trove with papers of and referencing many notables from the colonial and post-Revolutionary era, in addition to Bingham, Cobb and Black. Mentioned in the article:

Search of the attic of the century-old Black mansion in Ellsworth on Thursday disclosed a great wealth of documentary material relating to the history of early settlements in Hancock county and to the beginnings of the lumber industry in eastern Maine, the papers consisting largely of correspondence of William Bingham, famous landed proprietor, and other notables of his day, including officers who served in the Revolution under General Washington.

The Black house, built over 100 years ago by General David Cobb, who was eastern agent of the great Bingham estate, was occupied for many years by the General's son-in-law John Black, who succeeded him in the management of a vast domain of forest lands, estimated then at 2,500,000 acres. The house finally passed into the hands of George Nixon Black of Boston, last of his line, who died about a year ago and bequeathed the old mansion to the Hancock County Trustees of Public Reservations.

On August 20 of this year the trustees voted to accept the bequest and at once opened the house as a museum, since which time it has been visited by hundreds of people from all over the United States who greatly admired its quaint and beautiful furnishings.

Recently the executive committee of the trustees authorized one of their number Professor William Otis Sawtelle, late of Haverford College and now curator of Islesford Collections, Inc., to explore the Black house for whatever historical treasures it might contain, and on Thursday Professor Sawtelle made the interesting and important discoveries referred to in the beginning of this article.

The mass of manuscript found, all in an excellent state of preservation, includes the long-sought replies of Gen. Cobb to letters from William Bingham. Up to now only Bingham's side of the correspondence has been known. Reference is made in Bingham's letters to Gen Cobb and in Gen Cobb's replies to many famous men of the period of the Revolution and the years immediately succeeding including Thomas Willing of Philadelphia, partner of Robert Morris of that city, the banker who helped notably to finance the Revolution; Gen. Knox who was Washington's chief of artillery; Gen. Henry Jackson and other officers of the Revolution who after the war turned their attention to land speculation in Eastern Maine.  It may be mentioned in passing that the failure of William Duer, one of these speculators, precipitated the first financial panic in New York resulting from speculation.

There are, in the Bingham letters to Gen. Cobb, many references to and comments upon the Napoleonic wars and on the political situation in America at the beginning of the 19th century. Many of the Bingham letters were written from London, where he conducted his affairs after his removal from this country to Bath, England following the death of his wife. These are Bingham's last letters, his death soon following.  Many of his descendants are members of the French nobility today and still receive dividends from the Bingham estate.

Incidentally, it may be remarked that William Bingham and a party of friends were the first "summer visitors" to Maine, they having made a visit of six weeks in July and August 1796, to Gen. Knox at Thomaston, where that famous soldier had, in 1795, erected a mansion that was a marvel in its day.

By the will of William Bingham the original proprietor of the great tract of land known as the Bingham Purchase, the property was devised to a self-perpetuating board of trustees.  Among the members of the first board were: Alexander and Henry Baring, founders of the great banking house of Baring Brothers, London. Among the present trustees are Effingham B. Morris and Charles E. Ingersoll of Philadelphia. Hannibal E. Hamlin of Ellsworth is eastern agent. Alexander Baring, of the original board, afterward became Lord Ashburton, who, with Daniel Webster drew up the northeastern boundary treaty between the United States and England.

Among the old letters, besides business communications, petitions from settlers on the Bingham lands, etc., are some referring to Madame Rosalie de la Val's colony for exiled French nobility at Lamoine, on the eastern Maine coast.

Professor Sawtelle is to be congratulated on his discoveries in the ancient Black attic, which will greatly enrich the literature of a noble period and afford to students of this day a deeper and clearer insight into the minds of men who made history hereabout when Maine then a province of Massachusetts, was in the formative stage, progressing toward statehood."