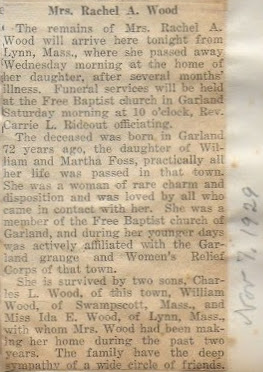 The obituary has a handwritten notation of the date November 7, 1929, but the Wednesday mentioned in the obituary was on November 6, 1929.  Perhaps November 7 was the date Rachel's body arrived at Dexter, Maine, and on to Garland, Maine.

Rachel and Fred had three sons and two daughters, I believe.  Of those, three survived their mother, as noted in the obituary.  At the time of Rachel's death, she was living with daughter Ida E. Wood in Lynn, Massachusetts.

Rachel, Fred and at least one of their children are buried in the Evergreen Cemetery at Garland, Maine, as are other relatives.

If you have information on the Wood and Foss families, please leave a comment or contact me directly.


Mrs. Rachel A. Wood
The remains of Mrs. Rachel A. Wood will arrive here [presumably Dexter, Maine] tonight from Lynn, Mass., where she passed away Wednesday morning at the home of her daughter, after several months' illness.  Funeral services will be held at the Free Baptist church in Garland Saturday morning at 10 o'clock, Rev. Carrie L. Rideout officiating.

The deceased was born in Garland 72 years ago, the daughter of William and Martha Foss, practically all her life was passed in that town. She was a women of rare charm and disposition and was loved by all who came in contact with her. She was a member of the Free Baptist Church of Garland, and during her younger days was actively affiliated with the Garland grange and Women's Relief Corps of that town.

She is survived by two sons, Charles L. Wood, of this town [Dexter, Maine], William Wood, of Swampscott, Mass., and Miss Ida E. Wood, of Lynn, Mass., with whom Mrs. Wood had been making her home during the past two years. The family have the deep sympathy of a wide circle of friends.