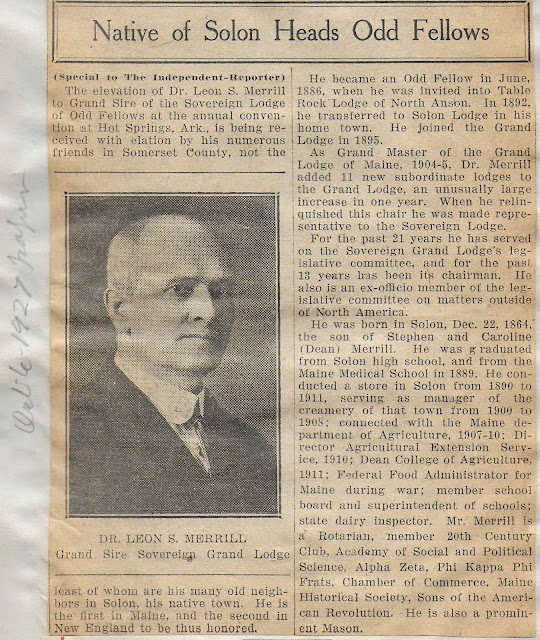 The byline hints that this article first appeared in the Skowhegan newspaper, the Independent-Reporter, which published from 1909 to 1955.

Dr. Leon S. Merrill (1864-1933), native of Solon, Maine, was elevated to Grand Sire of the Sovereign Lodge of Odd Fellows at the annual convention at Hot Springs, Arkansas.  A lengthy obituary of Merrill, who was a professor and dean at the University of Maine, appears on page 6 in the October 1933 issue of the Maine Alumnus.

It mentions that Dr. Merrill was one of the outstanding students in his class at Maine Medical School, but that his medical career was cut short due to failing eyesight. He then operated a store at Solon and managed a creamery, which led to his appointment as State Dairy Inspector.  He joined the faculty of the University of Maine in Orono in 1910 as Director of the Agricultural Extension Service and became Dean of the College of Agriculture.  Merrill Hall, built in the early 1930s, was named in his honor.

Native of Solon Heads Odd Fellows
(Special to the Independent-Reporter)
The elevation of Dr. Leon S. Merrill to Grand Sire of the Sovereign Lodge of Odd Fellows at the annual convention at Hot Springs, Ark., is being received with elation by his numerous friends in Somerset County, not the least of whom are his many old neighbors in Solon, his native town. He is the first in Maine and the second in New England to be thus honored.
He became an Odd Fellow in June 1886, when he was invited into Table Rock Lodge of North Anson. In 1892, he transferred to Solon Lodge in his home town. He joined the Grand Lodge in 1895.
As Grand Master of the Grand Lodge of Maine, 1904-5, Dr. Merrill added 11 new subordinate lodges to the Grand Lodge, an unusually large increase in one year. When he relinquished this chair he was made representative to the Sovereign Lodge.
For the past 21 years he has served on the Sovereign Grand Lodge's legislative committee, and for the past 13 years has been its chairman. He also is an ex-officio member of the legislative committee on matters outside of North America.
He was born in Solon, Dec. 22,  1864, the son of Stephen and Caroline (Dean) Merrill. He was graduated from Solon high school, and from the Maine Medical School in 1889. He conducted a store in Solon from 1890 to 1911, serving as manager of the creamery of that town from 1900 to 1908; connected with the Maine department of Agriculture, 1907-1910; Director Agricultural Extension Service, 1910; Dean College of Agriculture, 1911; Federal Food Administrator for Maine during war; member school board and superintendent of schools; state dairy inspector. Mr. Merrill is a Rotarian, member 20th Century Club, Academy of Social and Political Science, Alpha Zeta, Phi Kappa Phi Frats, Chamber of Commerce, Maine Historical Society, Sons of the American Revolution. He is also a prominent Mason.
[handwritten in margin: Oct 6 1927 paper]

If you have information on the Merrill, Dean and/or Wilson families, please leave a comment.

Posted by Pam Beveridge at 6:44 AM