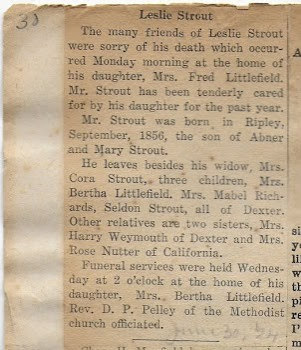 Obituary of Leslie Strout of Ripley, Maine, and Dexter, Maine, with handwriting noting the date, June 30, 1924, which was his date of death, not likely the date the obituary appeared in the newspaper.

He was Leslie Simon Strout, born in Ripley, either on 7 September 1856, as a record in the Maine J. Gary Nichols Cemetery Collection, ca. 1780-1999 [backed up by information in the obituary) or in 1855, as noted on his stone, photographed on FindaGrave.

Leslie, Cora and their children are all buried in the Mount Pleasant cemetery at Dexter, Maine.


Leslie Strout
The many friends of Leslie Strout were sorry of his death which occurred Monday morning at the home of his daughter, Mrs. Fred Littlefield.

Mr. Strout has been tenderly cared for by his daughter for the past year.

Mr. Strout was born in Ripley, September, 1856, the son of Abner and Mary Strout.

Funeral services were held Wednesday at 2 o'clock at the home of his daughter, Mrs. Bertha Littlefield. Rev. D. P. Pelley of the Methodist church officiated. 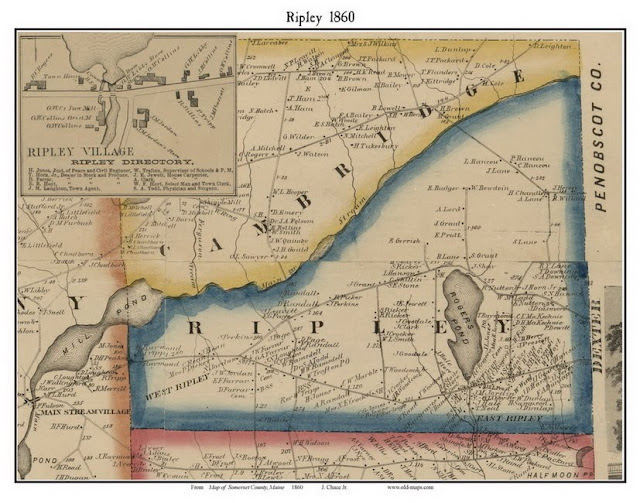 Posted by Pam Beveridge at 6:52 AM