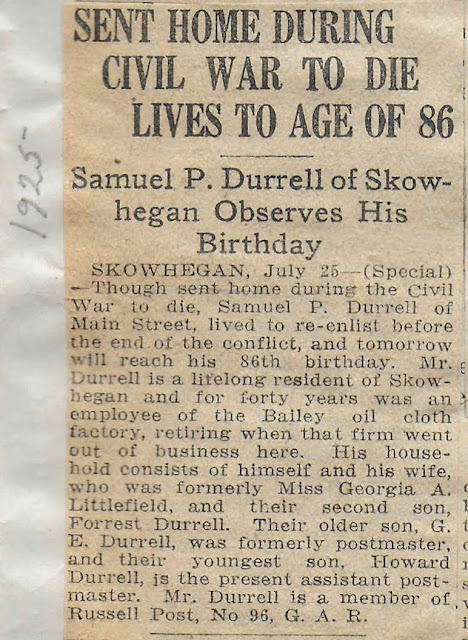 Found in a scrapbook of mostly Dexter, Maine, to Skowhegan, Maine, content:

Birthday notice of Samuel P. Durrell, who was sent home to die as a result of his Civil War service and yet lived to re-enlist and to reach the age of 86.

SENT HOME DURING CIVIL WAR TO DIE, LIVES TO AGE OF 86
Samuel P. Durrell of Skowhegan Observes His Birthday
SKOWHEGAN, July 25 - (Special) Though sent home during the Civil War to die, Samuel P. Durrell of Main Street, lived to re-enlist before the end of the conflict, and tomorrow will reach his 86th birthday. Mr. Durrell is a lifelong resident of Skowhegan and for forty years was an employee of the Bailey oil cloth factory, retiring when that firm went out of business here.  His household consists of himself and his wife, who was formerly Miss Georgia A. Littlefield, and their second son, Forrest Durrell. Their older son, G. E. Durrell, was formerly postmaster, and their youngest son, Howard Durrell, is the present assistant postmaster.  Mr. Durrell is a member of Russell Post, No. 96, G.A. R.

More information on Samuel P. Durrell's Civil War service is provided on his Find a Grave memorial.  As noted in the birthday notice, Samuel's wife was Georgia A. (Littlefield) Durrell (1849-1929).  Their sons:

Samuel P. Durrell, his wife Georgia A. (Littlefield) Durrell and at least two of their children are buried in the Southside Cemetery in Skowhegan, Maine.

See the Civil War monument, erected in 1898, in Skowhegan here.