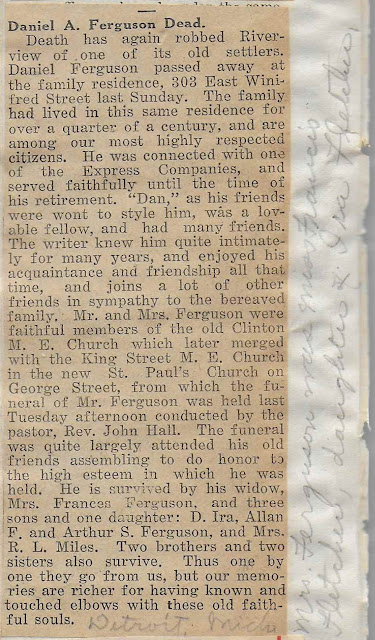 Obituary of Daniel A. Ferguson, husband of Frances (Fletcher) Ferguson.

The clipping presumably appeared in a St. Paul, Minnesota, newspaper and was either sent back to Maine or was perhaps reprinted in a paper in Skowhegan, Maine.

Handwriting on the clipping:

The obituary is pasted in a scrapbook of items mostly with a connection to the area encompassing Dexter, Maine, and Skowhegan, Maine.  I believe the connection here is that Daniel A. Ferguson's wife, Frances (Fletcher) Ferguson, was the daughter of a Skowhegan area native, [John] Ira Fletcher, who moved to New York and then to Detroit, Michigan, and may be the Ira Fletcher (1821-1882) buried in Skowhegan.

Daniel A. Ferguson was a native of Scotland, born about 1855. Frances (Fletcher) Ferguson was born about 1848 in New York, the daughter of Ira Fletcher and wife Elizabeth (possibly Gill) Fletcher.  It appears Daniel and Frances lived first in Detroit, Michigan, and then moved to St. Paul, Minnesota.

Frances may have been the Frances Ferguson who died in Ramsey County, Minnesota in 1933.

Does the article shown below, which was reprinted from a Providence, Rhode Island newspaper in The Western Star of Lebanon, Ohio, issue of 24 August 1882, refer to Frances' father Ira Fletcher? If the same Ira, what happened to his family in Michigan?  He was there with wife Elizabeth as late as the 1880, as recorded in the US Census of that year.  Perhaps Elizabeth died in the interim, and Ira's life was upended.

Daniel A. Ferguson Dead.
Death has again robbed Riverview of one of its old settlers. Daniel Ferguson passed away at the family residence, 303 East Winifred Street last Sunday. The family had lived in this same residence for over a quarter of a century, and are among our most highly respected citizens. He was connected with one of the Express Companies, and served faithfully until the time of his retirement. "Dan", as his friends were wont to style him, was a lovable fellow, and had many friends. The writer knew him quite intimately for many years, and enjoyed his acquaintance and friendship all that time, and joins a lot of other friends in sympathy to the bereaved family.  Mr. and Mrs. Ferguson were faithful members of the Old Clinton M. E. Church which later merged with the King Street M. E. Church in the new St. Paul's Church on George Street, from which the funeral of Mr. Ferguson was held last Tuesday afternoon conducted by the pastor, Rev. John Hall. The funeral was quite largely attended his old friends assembling to do honor to the high esteem in which he was held. He is survived by his widow, Mrs. Frances Ferguson, and three sons and one daughter: D. Ira, Allen F. and Arthur S. Ferguson, and Mrs. R. L. Miles. Two brothers and two sisters also survive. Thus one by one they go from us, but our memories are richer for having known and touched elbows with these old faithful souls.

Posted by Pam Beveridge at 8:21 AM