1930 obituary of Mrs. Mary (Burnham) Richardson (1839-1930) of Garland, Maine, pasted in a scrapbook of items mostly from the area encompassing Dexter, Maine, and Skowhegan, Maine.

Mary's middle initial appears as W. or E., depending on the source, but she herself wrote her signature as Mary W. Richardson on a pension form, an image of which appears on her FindaGrave memorial.

Mary was the widow of Lt. Lyman E. Richardson (1833-1861), a native of Rumford, Maine, son of Daniel Richardson and Lydia (Tyler) Richardson, according to an extensive FindaGrave memorial. The memorial notes the circumstances of Lt. Richardson's death as the result of participation in the First Battle of Bull Run.

By 1850 Lyman E. Richardson was living with the Foss family in Wayne, Maine, and eventually moved to Garland to teach school, where he presumably met Mary for the first time.  GAR Post 75 in Garland was named in honor of his honor. The L. M. Rideout noted as commander in an 1885 Maine State Yearbook may have been Luther M. Rideout or his son, Lyman E. Richardson's uncle or cousin, respectively.

Lyman and Mary are buried in the Burnham Cemetery at Garland, Maine. 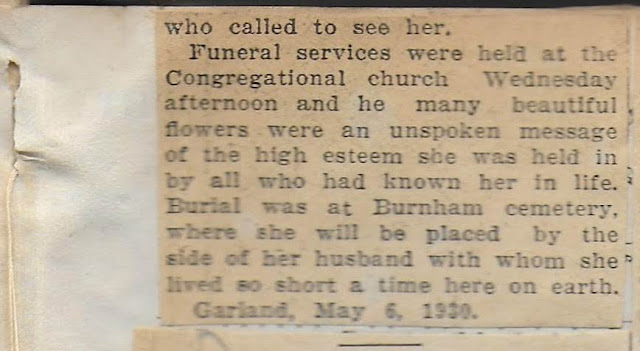 Mrs. Mary Richardson
[handwriting: Burnham; and along the margin: daughter of Eleazer Burnham]

Mrs. Mary W. Richardson passed away Sunday morning, May 4th, at the home of her cousin, Mrs. Lucia Lincoln, at the age of 90 years, 4 months and 19 days.  Her early life was passed on a farm in the east part of the town known as the Norton place and later as the Jack McKever farm. Mrs. Richardson was married to Lieutenant Lyman E. Richardson on May 16, 1860 [handwriting corrects that date to 1861; Lyman enlisted on April 26, 1861]. Two weeks later her husband left to enter the Civil war and was killed in August. Mrs. Richardson remained a widow for seventy years, a greater part of that time being spent in her little home here in the village.

She was a member of the First Baptist church and was always faithful in her attendance until poor health prevented. A short time ago she had electric lights installed in the church as a gift from her. She was also a member of the Lyman E. Richardson Relief Corps. The organization, as also, the Post, were so called in honor of her husband. Mrs. Richardson lived to see most of her dear ones to the "Better Land" and now leaves to mourn her loss two cousins, Orin and Ellen Rideout, besides several second and third cousins, among which was Mrs. Lincoln at whose home she was lived since last January, tenderly cared for by Mr. and Mrs. Lincoln and for the past five weeks assisted by a very dear friend, Mrs. Howard Clark, whom she wished to have remain with her until the last. Until the past few days she has suffered very little, being always bright and cheerful. And glad to see, and joke with her old friends who called to see her.

Funeral services were held at the Congregational church Wednesday afternoon and [t]he many beautiful flowers were an unspoken message of the high esteem she was held in by all who had known her in life. Burial was at Burnham cemetery, where she will be placed by the side of her husband with whom she lived so short a time here on earth.
Garland, May 6, 1930.

Posted by Pam Beveridge at 7:53 AM