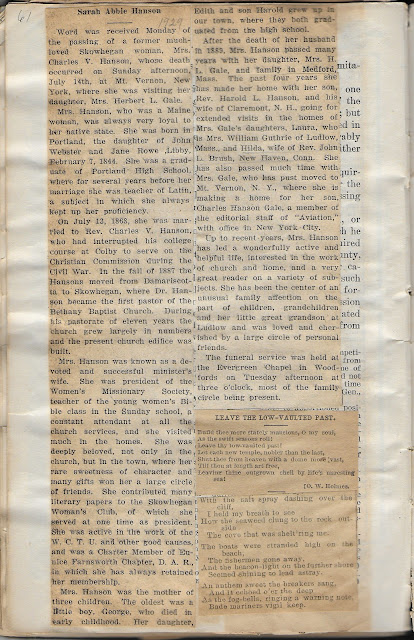 The obituary has a handwritten date of 1929.  It's pasted in a scrapbook with items mostly dealing with the areas of Dexter, Maine, and Skowhegan, Maine.

Sarah and Charles, a minister, lived in various Maine towns, including Skowhegan, which presumably prompted the obituary's inclusion in the scrapbook.

Sarah and Charles and relatives on both sides are buried in the Evergreen Cemetery in Portland, Maine

Note: Several members and extended members of the Libby and Hanson families, including descendants of Sarah Abbie Hanson and Rev. Charles Veranus Hanson, attended Colby College, according to the death notice of Sarah Brush Morse, Class of 1952 in the Colby Magazine, issue of July 13, 2016.

Word was received Monday of the passing of a former much loved Skowhegan woman.  Mrs. Charles V. Hanson, whose death occurred on Sunday afternoon, July 14, at Mt. Vernon, New York, where she was visiting her daughter, Mrs. Herbert L. Gale.

Mrs. Hanson, who was a Maine woman, was always very loyal to her native state. She was born in Portland, the daughter John Webster and Jane Rowe Libby, February 7, 1844. She was a graduate of Portland High School, where for several years before her marriage she was teacher of Latin, a subject in which she always kept up her proficiency.

On July 13, 1868, she was married to Rev. Charles V. Hanson, who had interrupted his college course at Colby to serve on the Christian Commission during the Civil War. In the fall of 1887 the Hansons moved from Damariscotta to Skowhegan, where Dr. Hanson became the first pastor of the Bethany Baptist Church. During his pastorate of eleven years the church grew largely in numbers and the present church edifice was built.

Mrs. Hanson was known as a devoted and successful minister's wife. She was president of the Women's Missionary Society, teacher of the young women's Bible class in the Sunday school, a constant attendant at all the church services, and she visited much in the homes. She was deeply beloved, not only in the church, but in town, where her rare sweetness of character and many gifts won her a large circle of friends. She contributed many literary papers to the Skowhegan Woman's Club, of which she served at one time as president. She was active in the work of the W. C. T. U. and other good causes, and was a Charter Member of Eunice Farnsworth Chapter, D.A. R., in which she has always retained her membership.

Mrs. Hanson was the mother of three children. The oldest was a little boy, George, who died in early childhood. Her daughter Edith and son Harold grew up in our town, where they both graduated from high school.

After the death of her husband in 1889, Mrs. Hanson passed many years with her daughter, Mrs. H. L. Gale, and family, in Medford, Mass. The past four years she has made her home with her son, Rev. Harold L. Hanson, and his wife of Claremont, N.H., going for extended visits in the homes of Mrs. Gale's daughter, Laura, who is Mrs. William Guthrie of Ludlow, Mass., and Hilda, wife of Rev. John L. Brush, New Haven, Conn. She has also passed much time with Mrs. Gale, who has pust [sic, just] moved to Mt. Vernon, N.Y., where she is making a home for her son, Charles Hanson Gale, a member of the editorial staff of "Aviation", with office in New York City.

Up to recent years, Mrs. Hanson has led a wonderfully active and helpful life, interested in the work of church and home, and a very great reader on a variety of subjects. She has been the center of an unusual family affection on the part of children, grandchildren and her little great grandson at Ludlow and was loved and cherished by a large circle of personal friends.

The funeral service was held at the Evergreen Chapel in Woodfords [Portland, Maine] on Tuesday afternoon at three o'clock, most of the family circle being present.