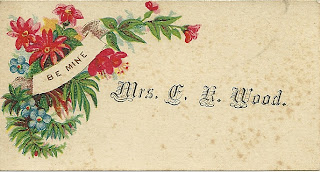 At first I had thought the name was Mrs. C. ? Wood, but a reader pointed out a mother/daughter relationship between Mrs. E. R. Wood and Cora M. Breyer. 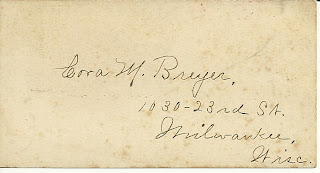 Cora Mae (Wood) Breyer was born 3 September 1866 in Portland, Dodge County, Wisconsin.  According to a reader, her mother was Euphelia or Euphrata R. (Sanborn) Wood, and her father possibly Ezra or Edward Wood.

Cora died 28 July 1949 in Edgerton, Wisconsin.  I've taken her birth and death dates from an obituary found in the Adventist Archives.  Apparently she and her husband and her son Fred Philip Breyer were involved in Seventh Day Adventist work.

The obituary gave the date of her marriage to Frederick William Breyer as 8 April 1888 but I believe the year was actually 1886.  I don't as yet have any information on Frederick W. Breyer other than that it's possible, from Census gleanings, that his mother was born in Ohio and his father in Germany.  I don't have his date of death, but I know that Cora was a widow by the time of enumeration of the 1920 Census of Chester, Wisconsin.

I found four children for Cora and Frederick: