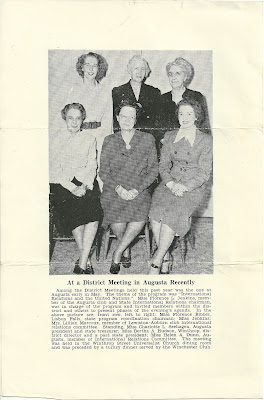 Photograph included in the May 1948 issue of "The B.P. W. Brevities", which also included the program for the June 11-13 Convention of the Maine chapter of Business & Professional Women, at Belgrade Hotel, Belgrade Lakes, Maine and submissions from area chapters.

Transcript of caption above:

At a District Meeting in Augusta recently
Among the District Meetings held this past year was the one at Augusta early in May.  The theme of the program was "International Relations and the United Nations."  Miss Florence L. Jenkins, member of the Augusta club and State International Relations chairman, was in charge of the program and invited members within the district and others to present phases of the evening's agenda.  In the above picture are, front row, left to right: Miss Florence Bibber, Lisbon Falls, state program coordination chairman; Miss Jenkins; Mrs. Lillian Marcoux, member of Lewiston-Auburn club international relations committee.  Standing, Miss Charlotte L. Seehagen, Augusta president and state treasurer; Miss Bertha A. Hudson, Winthrop, district director and a past state president; Miss Helen A. Dunn, Augusta, member of International Relations Committee.  The meeting was held in the Winthrop Street Universalist Church dining room and was preceded by a turkey dinner served by the Winchester Club. 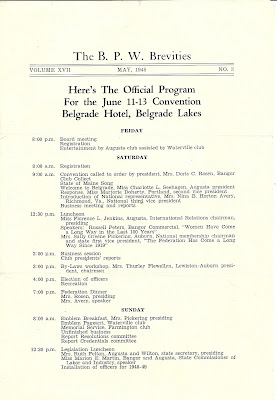 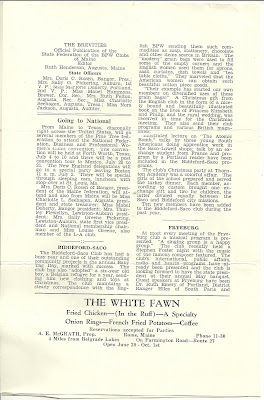 
Did you Know?
That the mountain across the lake facing the wide verandas of The Belgrade, our coming Convention headquarters, was once considered as a health retreat for the famous French actress, Anna Held?
That Elizabeth Arden, the famous general health and beauty builder, has her summer estate, Maine Chance, located only a few miles from The Belgrade on the Mount Vernon Road?
That a drive by her place would be an interesting sidelight?
That Florence Reed, the famous actress, lives in Belgrade Lakes every summer, and has for many years?

The Biddeford-Saco group had an interesting entry:

The Biddeford-Saco Club has had a busy year and one of their outstanding community projects is the annual Baby Tag Day, marked with success.  The club has also "adopted" a six-year-old boy, a Belgian refugee for a year, sending him new clothing and toys at Christmas.  The club maintains a steady correspondence with the English BPW sending them such commodities as soap, stationery, chocolate and other items scarce in Britain.  The "modern" grain bags were used to fill some of the empty corners and the English women used them for aprons, sash curtains, dish towels and "te table cloths".  They marveled that the American women can obtain such beautiful cotton piece goods.


"Their example has started our own members on diversified uses of these grain bags!"  A Christmas gift from the English club in the form of a nicely bound book on the lives of Princess Elizabeth and Philip, and the royal wedding, was received in time for the Christmas meeting.  They also send their club programs and various British magazines.


Illustrated lecture on "The Atomic Bomb", talks by three young South Americans doing apprentice work in the Saco-Lowell shops; talk by an exchange student from France and program by a Portland reader have been included in the Biddeford-Saco programs.


The club's Christmas party at Thornton Academy was a colorful affair.  The girls of the school prepared and served the the turkey dinner.  Each member, according to custom brought one exchange gift and two for children, the latter divided equally between the Saco and Biddeford city missions.


Ten new members have been added to the Biddeford-Saco club during the past year.

Posted by Pam Beveridge at 4:27 PM