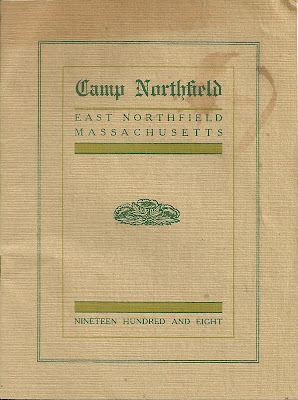 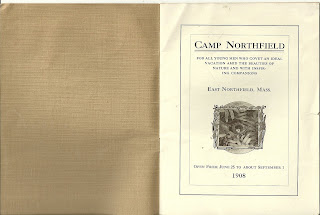 Camp Northfield
For All Young Men Who Covet An Ideal Vacation Amid The Beauties Of Nature And With Inspiring Companions
East Northfield, Mass.
Open From June 25 to About September 1
1908 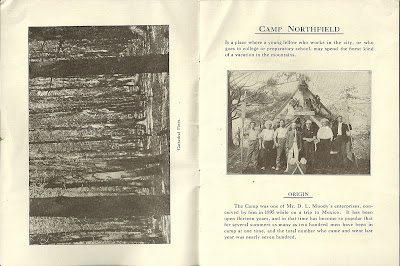 Caption for the Photo at left: Cathedral Pines


CAMP NORTHFIELD
Is a place where a young fellow who works in the city, or who goes to college or preparatory school, may spend the finest kind of a vacation in the mountains.


ORIGIN
The Camp was one of Mr. D. L. Moody's enterprises, conceived by him in 1895 while on a trip to Mexico.   It has been open thirteen years, and in that time has become so popular that for several summers as many as two hundred men have been in camp at one time, and the total number who came and went last year was nearly seven hundred. 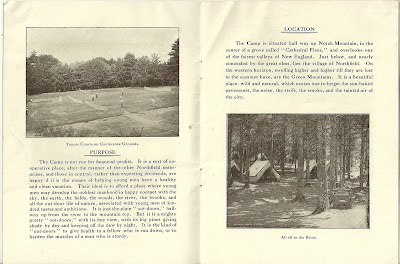 Caption of the Photo at left, above: Tennis Courts on Conference Grounds
PURPOSE
The Camp is not run for financial profits.  It is a sort of cooperative place, after the manner of the other Northfield enterprises, and those in control, rather than expecting dividends, are happy if it is the means of helping young men have a healthy and clean vacation.  Their idea is to afford a place where young men may develop the noblest manhood in happy contact with the sky, the earth, the fields, the wods,the river, the brooks, and all the out-door life of nature, associated with young men of kindred tastes and ambitions.  It is just the plain "out-doors", halfway up from the river to the mountain top.  But it is a mighty pretty "out-doors", with its fine view, with its big pines giving shade by day and keeping off the dew by night.  It is the kind of "out-doors" to give health to a fellow who is run down, or to harden the muscles of a man who is sturdy.


LOCATION
The Camp is situated half way up Notch Mountain, in the center of a grove called "Cathedral Pines", and overlooks one of the fairest valleys of New England.  Just below, and nearly concealed by the great elms, lies the village of Northfield.  On the western horizon, swelling higher and higher till they are lost in the summer haze, are the Green Mountains.  It is a beautiful place, wild and natural, which causes one to forget the sun-baked pavements, the noise, the strife, the smoke, and the tainted air of the city.


Caption of the Photo at right above:  All off to the River. 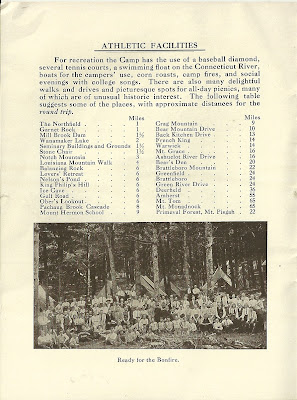 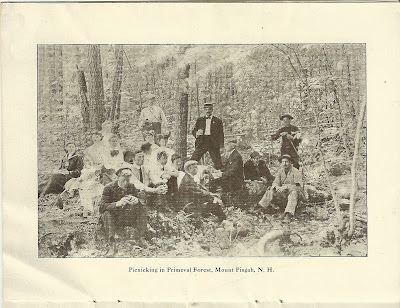 Caption for the photo, above: Picnicking in Primeval Forest, Mount Pisgah, N.H. 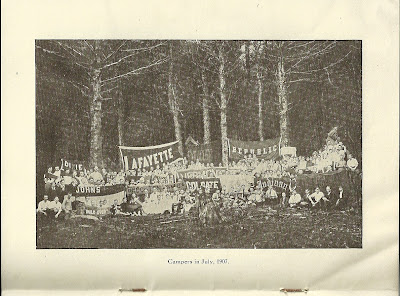 Caption for the photo, above: Campers in July, 1907 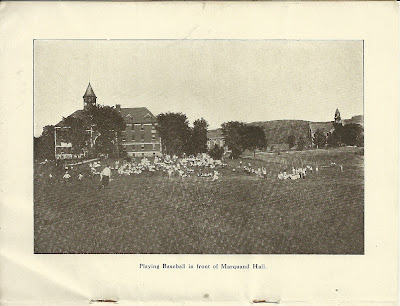 Caption for the photo above: Playing Baseball in front of Marquand Hall 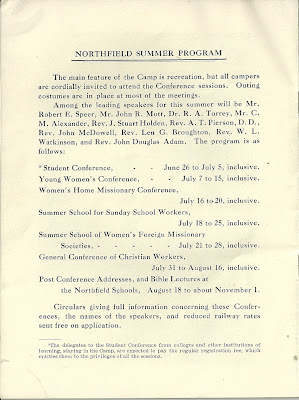 The main feature of the Camp is recreation, but all campers are cordially invited to attend the Conference sessions. Outing costumes are in place at most of the meetings.

Circulars giving full information concerning these Conerences, the names of the speakers, and reduced railway rates sent free on application.

*The delegates to the Student Conference from college and other institutions of learning, staying in the Camp, are expected to pay the regular registration fee, which entitles them to the privileges of all the sessions. 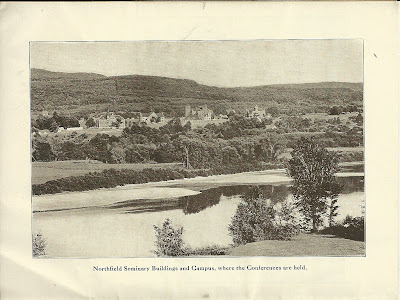 Caption for the photo above: Northfield Seminary Buildings and Campus, where the Conferences are held. 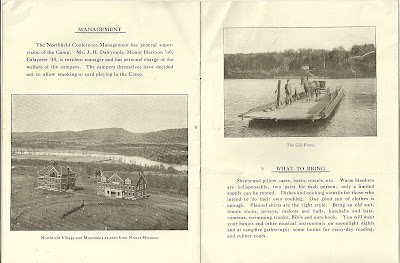 Caption for the photo at lower right, above: Northfield Village and Mountains as seen from Mount Hermon.

The Northfield Conference Management has general supervision of the Camp.  Mr. J. H. Dalrymple, Mount Hermon '06, Lfayette '10, is resident manager and has personal charge of the welfare of the campers.  The campers themselves have decided not to allow smoking or card playing in the Camp.

Caption for the photo at right, above: The Gill Ferry

WHAT TO BRING
Sheets and pillow cases, basin, towels, etc.  Warm blankets are indispensable, two pairs for each person; only a limited supply can be rented.  Dishes and cooking utensils for those who intend to do their own cooking.  One good suit of clothes is enough.  Flannel shirts are the right style.  Bring an old suit, tennis shoes, jerseys, rackets and balls, baseballs and bats, cameras, swimming trunks, Bible and notebook.  You will want your banjos and other musical instruments on moonlight nights and at campfire gatherings; some books for rainy-day reading, and rubber coats. 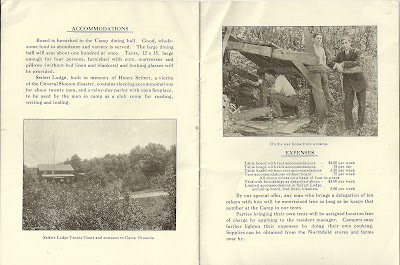 Caption for photo at left, above: Seifert Lodge Tennis Court and entrance to Camp Grounds.

ACCOMMODATIONS
Board is furnished in the Camp dining hall.  Good, wholesome food in abundance and variety is served.  The large dining hall will seat about one hundred at once.  Tents, 12x15, large enough for four persons, furnished with cots, mattresses and pillows (without bed linen and blankets) and looking glasses will be provided.

Seifert Lodge, built in memory of Henry Seifert, a victim of the General Slocum disaster, contains sleeping accommodations for about twenty men, and a rainy-day parlor with open fireplace, to be used by the men in camp as a club room for reading, writing and loafing.

Caption for the photo at right, above: On the way home from a tramp

By our special offer, any man who brings a delegation of ten others will him will be entertained free as long as he keeps that number at the Camp in our tents.

Parties bringing their own tents will be assigned location free of charge by applying to the resident manager.  Campers may further lighten their expenses by doing their own cooking.  Supplies can be obtained from the Northfield stores and farms near by. 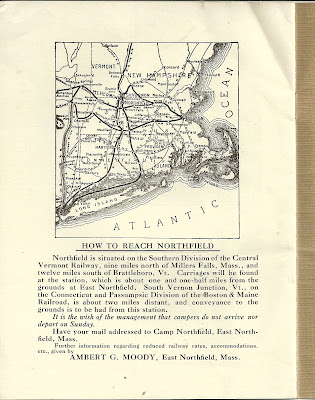 HOW TO REACH NORTHFIELD
Northfield is situated on the Southern Division of the central Vermont Railway, nine miles north of Millers Falls, Mass., and twelve miles south of Brattleboro, Vt  Carriages will be found at the station, wch is about one and one-half miles from the grounds at East Northfield.  South Vernon Junction, Vt., on the Connecticut and Passumpsic Division of the Boston and Maine Railroad, is about two miles distant, and conveyance to the grounds is to be had from this station.

It is the wish of the management that campers do not arrive nor depart on Sunday.