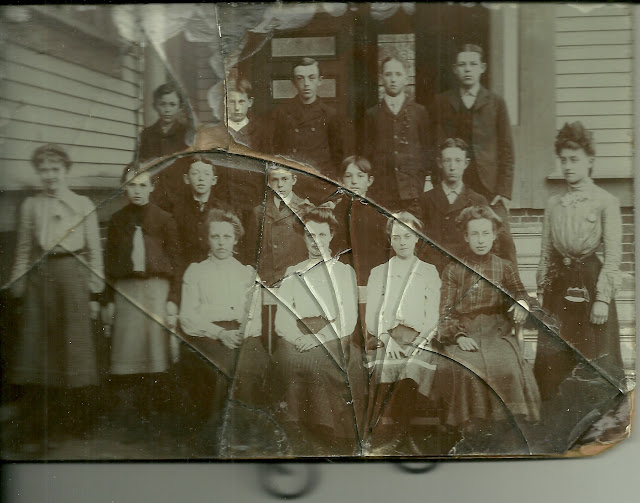 Photograph glued to glass (broken) with a stand affixed to it, of students at the Second Grammar School at Dexter, Maine, in 1903. 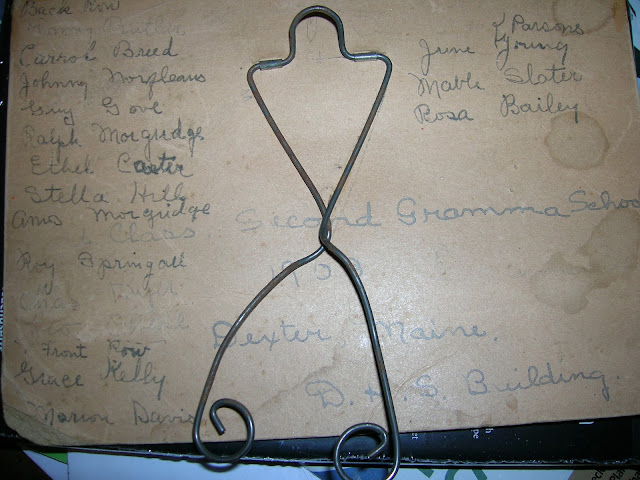 Names of the students:

Grace Kelly
Marion Davis
June Parsons (the reference to Young, may mean that she is the June Parsons who married Harry W. Young)
Mable Slater (I found a Mable Slater in the Maine Marriages database, so this is likely the correct spelling)
Rosa Bailey

Researching the 1900 Census for Dexter, Maine, I was able to find the following:

Guy Gove, born about 1890 in Maine, son of Fred and Edith Gove

Ralph Vernard Morgridge, born 30 January 1890 (according to his WWI draft enlistment card) in Maine, son of Charles and possibly Ethel

Grace Kelly or Grace Kelley, born about 1889 in Washington, D.C., daughter of Sarah (Sadie).  She may be the Grace C. Kelly, who married Herbert E. Woodward on 17 November 1945.

June Parsons, born about June 1889 in Maine, daughter of Forrest and possibly Rose Parsons.  She may be the June Parsons who married Harry Young of Dexter on 25 June 1913.

Mable Slater, born about Oct 1888 in Maine, daughter of George and possibly Emily Slater.  In the Maine Marriage online database, there's a Mable F. Slater who married Harry W. Young on 23 August 1944.  Could this be the same Harry W. Young who married June Parsons?

Rosa Bailey, born about December 1887 in Maine, daughter of Edwin and possibly Carrie Bailey.  I found a Rosie L. Bailey in the Maine Marriages database.  She married Charles E. Pendexter on 10 February 1906 and Elbridge A. Flanders on 27 March 1907.

Here's a map of Dexter, Maine, a scenic town of lakes, hill and farmland, located on Route 7 between Newport and Dover-Foxcroft.
\