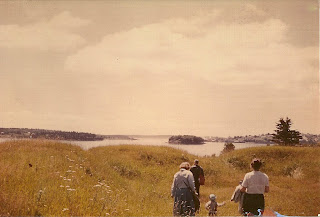 Treat Island, sometimes called Treat's Island or, farther back in time, Allan's Island, is situated near the juncture of  Passamaquoddy and Cobscook Bays, along the border of Maine and New Brunswick.  It lies on the Maine side of the border, near Lubec and Eastport.   Luckily, it's had owners who have cared for it for generations and who recently made it available to the Maine Coast Heritage Trust for protection forever.  It's a beautiful island of varied habitat and vistas and worthy of preservation on those points alone, but the island also has historical significance.

The island's most famous resident was Colonel John Allan, a member of General George Washington's personal staff.  He was appointed Military Commander of the Eastern District of Maine and was tasked with organizing colonists in the area and working with area tribes to keep them neutral in the Revolution.

After the Revolution, he opened a store on the island and continued his friendship with area tribes, who hold him in high regard to this day. His records show that he traded on occasion with Benedict Arnold, who lived for a time on the neighboring island of Campobello.

I noted online that someone was surprised that Allen didn't try to capture Arnold for the bounty on his head.  Perhaps Allan was sympathetic to him, knowing of Arnold's shabby treatment by Gates and Wilkinson.  [I'm looking forward to reading the new biography of James Wilkinson and to seeing the new movie currently being made about Arnold by a UK historian]

Allan also was a customs official at Eastport, on another neighboring island, Moose Island.

John Allan Cenotaph on Treat Island
I'd be very surprised if Franklin Delano Roosevelt and family didn't also explore this island on occasion, as their summer cottage, now Roosevelt Campobello International Park , is on a nearby part of Campobello.   Campobello is now accessible by bridge from Lubec, Maine.

Treat Island reportedly had up to fifty houses at one point, but has long been uninhabited.  There are ruins of foundations and the telltale mounds of an artillery battery dating to the 1860s when the Union feared a Confederate threat to the area. 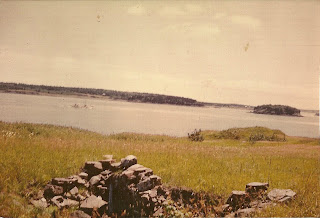 Foundation foreground; mounds remaining from battery, center
Campobello in background, at left
I haven't been on the island for decades but we found a cannon, as you can see.  There's a local legend that some folks attempted to steal a cannon at one point, got it into their boat, got underway and then capsized, with the cannon going overboard. 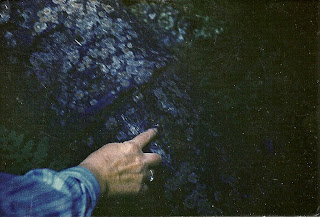 Pointing to the Insignia 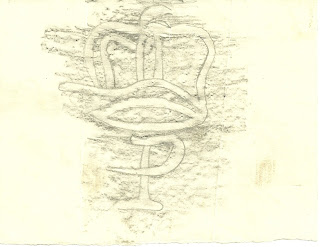 Rubbing taken from cannon insignia
It's my understanding that the "P" at the base of the insignia represents Portsmouth, England.  If you have further information on the possible origin of this cannon, please let me know.

Thanks for stopping by!   Hopefully, there's a visit to Treat Island and Passamaquoddy and Cobscook Bays in your future.  http://www.quoddyloop.com/

Posted by Pam Beveridge at 7:20 AM