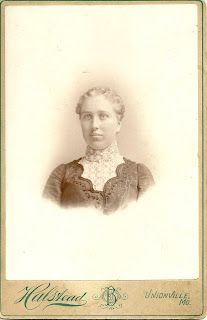 Photograph of Delia, by a Unionville, Missouri Photographer.  Delia, I believe, is the mother of Gladys Stewart, whose photograph is the subject of an earlier blog post.  That would make her husband William Marion Stewart, who was born in 1851 in Iowa.  From the back of Delia's photograph, it appears that she lived in Boonville, Iowa, and that her last name ended in "ford".  According to the 1900 Census, she was born in Iowa in 1852.  Daughter Gladys was born in 1892 in Nebraska.  The family later moved to Colorado, and Delia and her husband died in Oregon in 1928 and 1930, respectively. 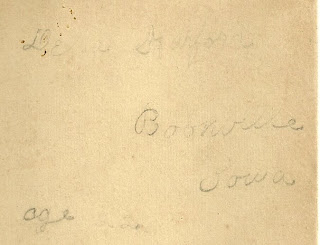 If you can shed any light on this family, I would appreciate your getting in touch with me.

In the meantime, enjoy!