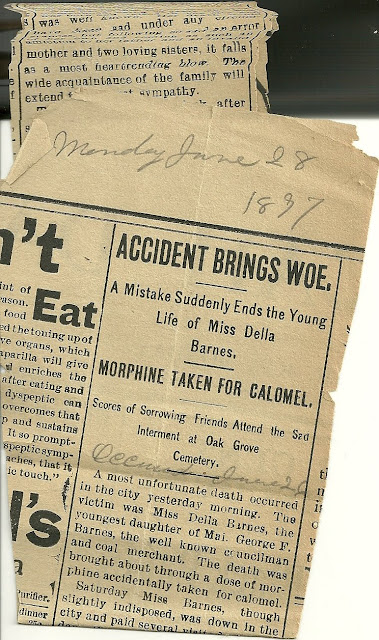 [Update: scroll down to the comments section for some interesting responses to this post.]

A most unfortunate death occurred in the city yesterday morning.  The victim was Miss Della Barnes, the youngest daughter of Maj. George F. Barnes, the well known councilman and coal merchant.  The death was brought about through a dose of morphine accidentally taken for calomel.

Saturday Miss Barnes, though slightly indisposed, was down in the city and paid several visits during the day. She was very bright throughout the evening and along about 10 o'clock prepared to retire, saying as she left the family room that she was going to take a dose of calomel.  Miss Clara Blair, a cousin, from Ohio, has been a guest of the family for several days and she and Miss Barnes were occupying the same room.  Miss Blair was the first to retire, but was awake when Miss Barnes entered the room.  The two spent a few moments in chatting and then Miss Barnes remarked that she was going to take a dose of calomel and proceeded to carry out the idea.  She then began to undress, but soon complained of being sick and vomited up the medicine.  In a few moments she laughingly said she was feeling better and believed she would try another dose of the medicine, and suiting her action to the remark she did take the dose.  She then disrobed and got into bed, and after a few minutes Miss Blair said both had fallen asleep.  Just how long the two had been in slumber no one knows, but shortly after 11 o'clock Miss Blair says she was awakened by Miss Barnes' breathing, and fearing she had the nightmare or was ill she attempted to arouse her, but was unable to do so.  Becoming alarmed, Miss Blair jumped from bed and called to Mr. and Mrs. Barnes and the family was soon in the room.  Their efforts to arouse Miss Barnes were also unsuccessful and a messenger was sent posthaste for Dr. E. A. Elliott, the family physician.  By the time the doctor's presence could be secured it was about 12 o'clock and when he arrived Miss Barnes was to all appearances just alive.  A hasty examination developed that Miss Barnes had accidentally taken a narcotic and from the description of the medicine given by Miss Blair it was clear that the medicine was morphine.  Dr. Elliott immediately asked for assistance and Dr. D. H. Murrell was sent for and was soon present.  The two made every effort to revive Miss Barnes, but though they were able to maintain life for several hours from the first it was evident she must die, and at 5:30 o'clock yesterday morning life was extinct.  Death had once more come like a thief in the night and a home was in mourning, where but a few hours before all was happiness.

Miss Barnes was just on the verge of womanhood, being 22 years old.  She was born and raised in the city and was well known.  Her death would have been sad under any circumstances, but following so sad an  error of her own and coming as such an affliction to her father and an invalid mother and two loving sisters, it falls as a most heartrending blow.  The wide acquaintance of the family will extend the deepest sympathy.

This afternoon at 3 o'clock, after services at the family residence, 1723 Jefferson Street, by Rev. J. C. Tully, the remains were taken to Oak Grove Cemetery for burial.  At the grave E. W. Bagby, esq., a close friend of the afflicted father, pronounced a beautiful oration.  There were a number of friends at the house and grave to pay their last respects to the departed and weep with the bereaved."

This clipping was found with some items from the Blair and Richards family of Kentucky and Ohio, including the 1850s autograph book of Irene Richards.  It's possible that the Clara Blair referenced in the clipping was Irene's granddaughter Claril Blair, born about 1875 in Kentucky.  She was born a Blair, as far as I could tell, though I haven't found her parents; an online source said she goes back to David, Joseph and Joseph B. Blair of Kentucky.  Claril married a Blair: John Burtram Blair, the son of Alfred Harrison & Jane (Silvernail) Blair.

Calomel itself looks to be a dangerous substance, but apparently it and morphine were often found in the 19th medicine cabinet.

If you have any information to share on the Barnes, Blair or Richards families of Kentucky and Ohio, please leave a comment or contact me directly.

Posted by Pam Beveridge at 1:22 PM