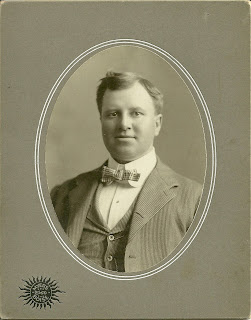 Dudley H. Van Deusen was born about 1870 in Illinois and died in 1929 in Portland, Oregon.   He was the son of Thomas T. and Mary (Gulick) Van Deusen.

He and his wife Elmina, the daughter of Thomas Brown and Catherine (Baker) Hayslip, were married 23 Sep 1901 in St. Marys Kansas; they had 2 children: Mary Eva and Dudley Howard.  In the 1920 Census, he was living in Emmett, Gem County, Idaho, raising stock.  He had found his way to Idaho in 1898 and immediately saw its potential for raising sheep and cattle.  His brothers and father eventually joined him, and they amassed one of the largest sheep and cattle ranches in the area.

Posted by Pam Beveridge at 2:58 PM