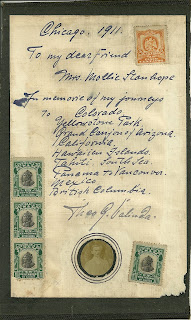 In memorie of my journeys to

Along with the many stamps, he pasted a tiny portrait of himself at bottom. 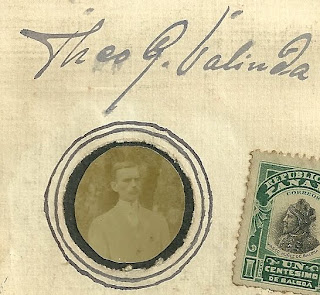 Here is what I could determine online; hopefully it's correct.  Theodore Gustave Valinda was born in 1880 in Germany and died in Winnetka, Illinois in 1966.   In the 1930 Census, his lists as occupation as Designing Engineer, Bridge Construction.

He married Blanche B. Smith, who was born in Nova Scotia in 1875, the daughter of William MacVicar Smith and his wife Helen Margaret "Ellen".  Blanche died in 1952 in Evanston, Illinois, according to an obituary in the Halifax Chronicle-Herald.  She left 3 sisters: Miss Elizabeth G. Smith; Miss Bertha M. Smith; Mrs. George R. Laidlaw (Helen), all of Halifax; and two brothers: Horace H. Smith and Edgar D. Smith, both of Dartmouth.  Her parents had predeceased her.

If you have any further information to add to the life of Theodore Gustave Valinda or his wife Blanche, please contact me.  I'm also interested in who Mrs. Mollie Stanhope was.

Posted by Pam Beveridge at 1:58 PM