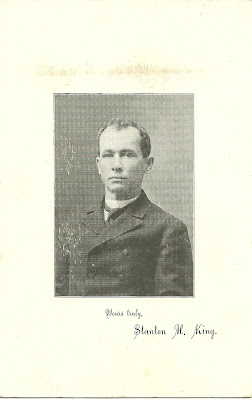 Printed card with photo, the purpose of which, I assume, was to be given out to people upon meeting them.

Stanton Henry King was born in Barbados on 1 May 1867 and died 10 November 1939 in Everett, Massachusetts; his death date was contributed by a reader via the comments section below.

After spending some years at sea in the US Navy, he went to Boston and became director of the Sailors' Haven.  He was an author and singer and compiler of sea chanties.  His books include "Dog Watches at Sea", 1900, where he describes the life of the common sailor.

In response to the query of a reader, I started a family tree for Stanton Henry King and transcribed some newspaper articles I found about him.  Interestingly, he was one of 28 or 29 children; the 27th, from his father's third wife.  I'm still looking for his parents' names, but I believe he married twice and had at least three children.  One of his sons, Allan Brewster King, married Carolyn Louise Whittemore, whose baby photograph is the feature of another post from this blog.

A book he wrote about his early years at sea, Dog Watches at Sea, is available at archive.org.


Excerpt from an article in the Fitchburg Daily Sentinel, February 13, 1909

Christ Church Men's Banquet.  Long article which includes a description of a speech by Stanton Henry King of the Sailors' Haven in Charlestown, Massachusetts.

The last speaker, Stanton H. King of Charlestown representing the laity, told especially of the work of the Sailors' Haven of Charlestown.  His forceful delivery, his use of nautical terms with spiritual application and his numerous sallies at the clergy, evangelistic workers and others caused much merriment and added greatly to the effect of the points of his address.

Mr. King said he was a native of the Barbadoes, which, so far as known, have sent only two great men to the United States - Alexander Hamilton and himself.  Continuing, he said that one of the needs of the times is that of having the clergy take off the shackles from the laymen and give them a chance to work.  If the clergy only had faith in us and gave us a chance, he said, there would be better results.  The haven is the work of a laymen, is still in the charge of laymen and is a sample of what they can do when given an opportunity.

Mr. King said that he is one of the 29 [possibly 28, smudged] children of his father, who had three wives.  Eleven were children of the first wife, ten of second and eight of the third, the speaker being number 27.  He told of his early desire to be a sailor, but when he became one he found that he was no longer considered a human being, but was looked on rather as a part of the scrap heap of the earth, as a sinner, all sailors being commonly assigned to that class.  When I was on ship, he said, the sky pilots used to come aboard with armfuls of tracts, thinking that the terms 'sailor' and 'sinner' were synonymous.  The Episcopal church of Boston started 17 years ago to take up the work among the sailors, after many others had tried and failed in their wrong ideas of such work.  We started in a little room above a saloon, and at that time the section was a dangerous one, God save me from condescension and humility.  As a sailor I could not stand them and as a sailor I was looked down upon.  One day when I was on the Wabash some women came aboard to hold a temperance meeting and I went over to the railing to dodge them. They wanted me to go to the Y.M.C.A.  Thank God that institution is also broadening out.

One day a woman called and took me to her home, which was the first home I ever entered except my father's since becoming a sailor.  I liked the manner in which I was treated, asked and obtained her consent to bring some of my shipmates on another occasion.  We were treated like human beings, and we liked it.

When we first came to our present location in Boston, the people thought the district was ruined by the presence of sailors, but soon the walls began to come down one by one, for our quarters were growing too small for our uses.  One Christmas night Rev. Dr. Leighton Parks and the Bishop came and saw 700 men crowded into a room capable of seating only 200.  They said that something ought to be done, and as a result $50,000 was raised in 14 months.  The very first night I took a bag and went the rounds for a collection, in which came a gift of $10,000 from August Hemenway.  If you ever come to Charlestown, call opposite the Hoosac Tunnel docks and see us in our magnificent home.  This, however, is already getting too small, and we are thinking of raising $100,000 for another.  You here in Fitchburg should be interested, for you receive the benefits as well as does the city of Boston, and you have as much right to assist in the support of the haven as have the people of that city."

The article goes on in a more religious vein.  Toward the bottom of the page, the text becomes more and more difficult to decipher.  The article continues at the top of the next column and is again readable.  Transcription to be continued.

From the
NEWSPAPER: The Fort Wayne News And SentinelPUBLICATION: 14 Feb 1918 - Fort Wayne, Indiana

Official chantie man for the American Merchant Marine is a brand new war job now being held down by Stanton H. King, of Boston.  King is to revive chantie singing among the young sailors of Uncle Sam's new cargo ships.  An old salt, who first went to sea from the Barbadoes thirty-eight years ago, and who for years sailed on deep-water Yankee ships, King shows that a good chantie is worth an extra hand.  He is the best known singer of sailor songs in the country.  "Many a time when things were going wrong, a fellow yo-h-ing a lively song has put strength into all our arms", said King.  "You know the sailor has a sweetheart in every port.  But the sailor's heart is not easily broken, for when one nymph leaves him, he speedily turns to another.  Here's a harrowing pang: 'How I missed her, how I missed her, How I missed my Clementine!  But I kissed her little sister and forgot my Clementine."  We can bring many a fine old chantie up to date for use on army transports.  This would go fine in the war zone: ' Masy a gallant ton of coal our bunkers they are full, Poke away my stokers, poke away!'"  King now runs the Sailors' Haven at Charlestown, Mass., alongside a barroom.  This mission is known to sailors the world over.

Stanton H. King of Boston has the only war job of its kind.  He is official chantie man of the American Merchant Marine.  His work will be to revive chantie singing among merchant sailors who will join the country's new cargo ships through the United States shipping board recruiting service, national headquarters of which are at Boston.  While chantie singing has declined on all seas, owing to the change in recent years from sailing vessels to steamers, there not being much opportunity to "heave and haul" on board a steamer - its revival is considered important for two reasons.  Mr. King is an old salt and learned chantie singing in its home, on deepwater vessels.  He began going to sea 38 years ago from the Barbados, in the merchant service.  For six years he served chiefly on deep-water Yankee ships.  In January 1886 he found himself at Boston and joined the navy there for a cruise around the world in the Alliance.  Having become greatly interested in the welfare of the sailor while a sailor himself, he next went to the Moody School for two years and in the spring of 1893 started the Sailors' Haven at Charlestown, Mass., alongside a barroom.

Posted by Pam Beveridge at 2:50 PM