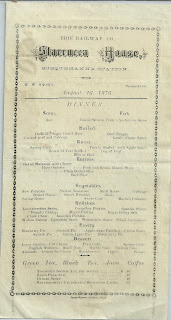 People certainly dined in style!   Here is just a sampling of what was offered:


From searching online, I see that the Starrucca House may now be closed.  Apparently at one time it was the oldest brick railroad station still in use in the nation.  Here is a link :http://www.starruccahouse.net/
Twitter: ToddHouse
Buzz: ToddHouse Genealogy
Downeast Maine & Maritime Canada Genealogy