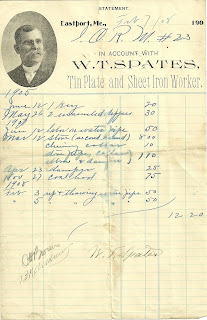 The parents of William Thomas Spates were John Edward(s) Specht, born in 1813 in Nova Scotia, and Sarah S. McMullen, born in 1812 in Digby, Nova Scotia.  William's paternal grandparents were Thomas William Specht (son of Hessian Johann Julius Anthon Christoph Specht of Braunschweig, in what is now Germany) and his wife Bridget.  William's maternal grandparents were Peter McMullen and his wife Mary Joanna McDormand of Digby, both of Nova Scotia.

William Thomas Spates married Anna Graham of Nova Scotia; they had, I believe, three sons and a daughter.

Other names that appear on the invoice are O. H. [?] Brown and B. N. Andrews, who must have been members of the I.O.R.M., which I assume was the International Order of Red Men, to whom the invoice is directed.  I found Oscar H. Brown and Byron N. Andrews in the 1900 Census for Eastport, Maine.

Posted by Pam Beveridge at 7:59 AM