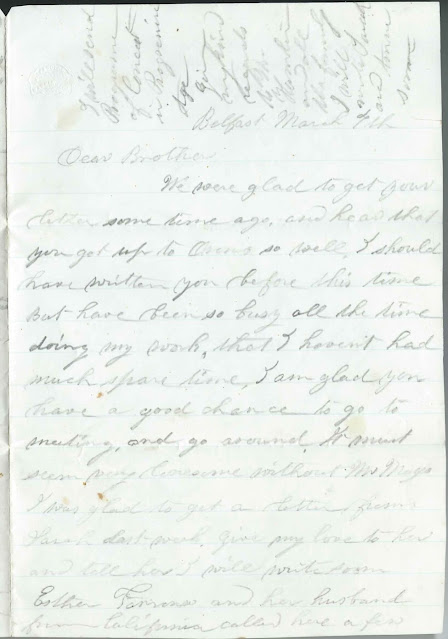 1877 letter from sister Hannah at Belfast, Maine, to her brother at Orono, Maine, where he was apparently living with relatives and in-laws, perhaps Sarah (Houston) Hamlin, second wife of Wellington Bacon Hamlin

They were presumably Hannah (Houston) Wording, wife of Captain Charles Wording, and her brother Benjamin Franklin Houston, whose extended family and in-laws included members of the influential Mayo and Hamlin families. 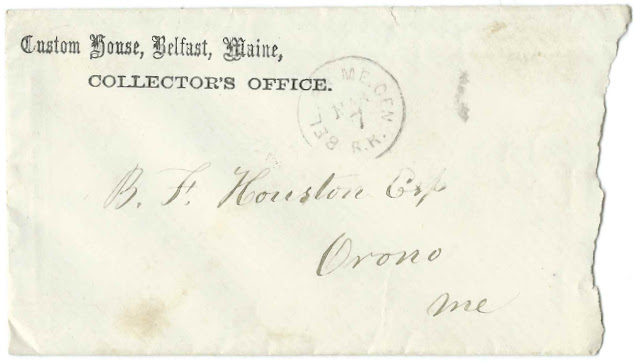 In addition to sister Sarah noted above, another sibling, Martha, married merchant and railroad owner Gideon Mayo, and sister Louisa married Gideon's brother Timothy Mayo.  The Mr. Hamlin mentioned may have been the above-mentioned Wellington Bacon Hamlin or his son George Herbert Hamlin, who was an associate of Gideon Mayo and a professor at Maine State College.

The siblings were among the eight children born in the late 1700s and early 1800s to Joseph and Martha (Brown) Houston.

The letter is dated over the 4th and 5th of March, with no year written, but Hannah helpfully mentioned that the latter day was a fine one for the Inauguration of Mr. Hayes and Mr. Wheeler, which occurred on March 5, 1877.

If the clues point you to a sister and brother other than Hannah (Houston) Wording and Benjamin Franklin Houston, please leave a comment or contact me directly. 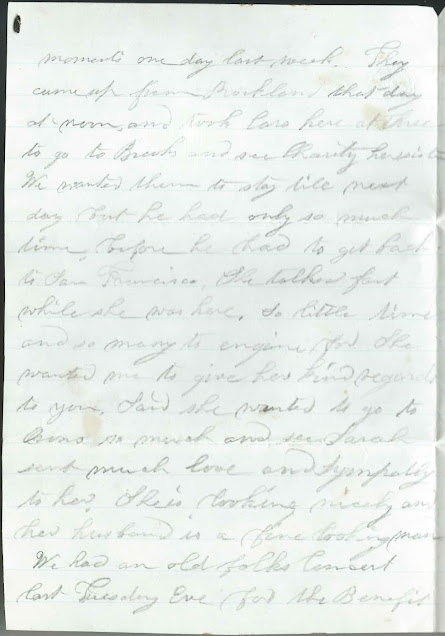 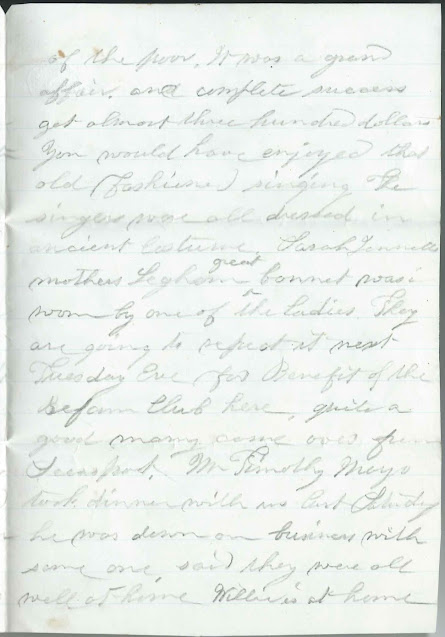 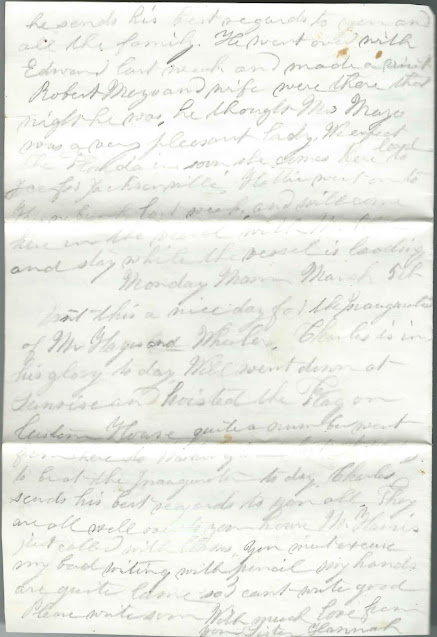 Note the added note squeezed into the top:

I will send Program of Concert in Progressive [?] Age.  Give my kind regards to Mr. Hamlin and all the family.  I will write Sarah and Annie soon.

Belfast, March 7thDear Brother,We were glad to get your letter some time ago, and hear that you get up to Orono so well.  I should have written you before this time but have been so busy all the time doing my work, that I haven't had much spare time.  I am glad you have a good chance to go to meeting, and go around.  It must seem very lonesome without Mr. Mayo.  I was glad to get a letter from Sarah last week.  Give my love to her and tell her I will write soon.

Esther ? and her husband from California called here a few moments one day last week.  They came up from Rockland that day at noon and took cars here at three to go to Brooks and see Charity, her sister.  We wanted them to stay till next day but he had only so much time, before he had to get back to San Francisco.  She talked fast while she was here, so little time and so many to inquire for.  She wanted me to give her kind regards to you.  Said she wanted to go to Orono so much and see Sarah.  Send much love and sympathy to her.  She is looking nicely and her husband is a fine looking man.  We had an old folks Concert last Tuesday Eve (for the Benefit.  of the poor.  It was a grand affair and complete success.  Got almost three hundred dollars.  You would have enjoyed that old fashioned singing.  The singers were all dressed in ancient costume.  Sarah Tennett's mother's Leghorn great bonnet was worn by one of the ladies.  They are going to repeat it next Tuesday Eve for the Benefit of the {?]Club here, quite a good many came over from Searsport.  Mr. Timothy Mayo took dinner with us last Saturday.  He was down on a business with someone, said they were all well at home.  Willie is at home.  He sends his best regards to you and all the family.  He went over with Edward last week and made a visit.  Robert Mayo and wife were there that night he was; he thought Mrs. Mayo was a very pleasant lady.  We expect the Florida in soon.  she comes here to load ice for Jacksonville, Hattiesport on to [Kennebunk [?] last week and will come here in the vessel with [?] and stay while the vessel is loading.

Monday Morn, March 5. [1877]
Isn't this a nice day for the Inauguration of Mr. Hayes and Wheeler.  Charles in his glory today.  Will went down at Sunrise and hoisted the Flag on Custom House.  Quite a number went from here to Washington last Saturday to be at the Inauguration today.  Charles sends his best regards to you all.  They are all well over to your home.  Mr. Harris just called with Clara so I can't write good.  Please write soon.  With much love from your Sister Hannah.

Posted by Pam Beveridge at 9:48 AM