1813 Act to Set Off Part of Monmouth, Maine, and Annex it to Winthrop, Maine

"An Act to Set Off Part of the Town of Monmouth, and to Annex the Same to the Town of Winthrop", a description that takes up part of two pages in the 1813 edition of Laws of the Commonwealth of Massachusetts, Passed by the General Court, at Their Session, Which Commenced on Wednesday the 26th Day of May, and Which Ended on the 16th Day of June, 1813. 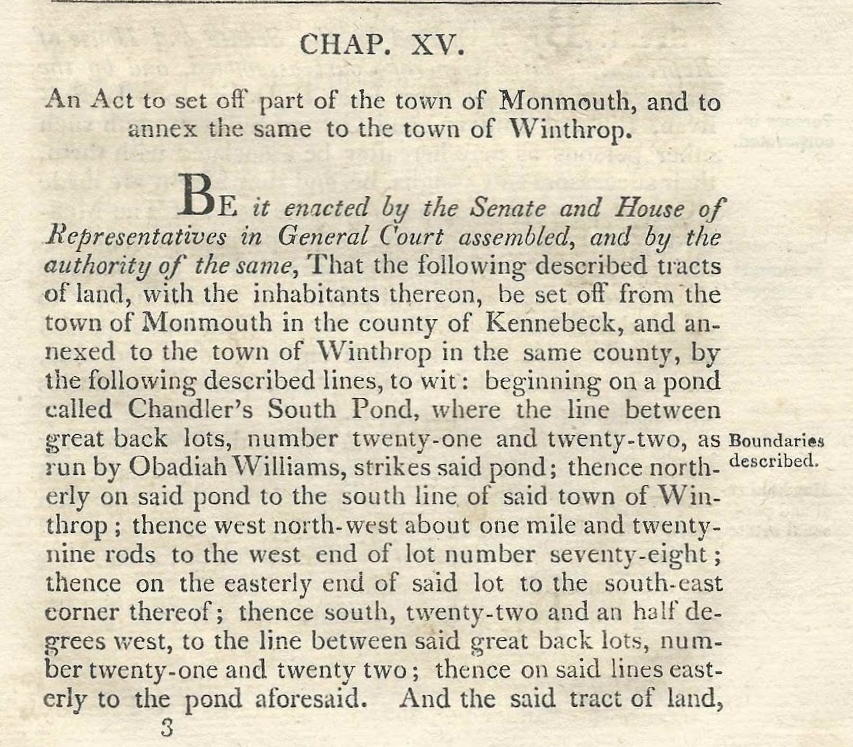 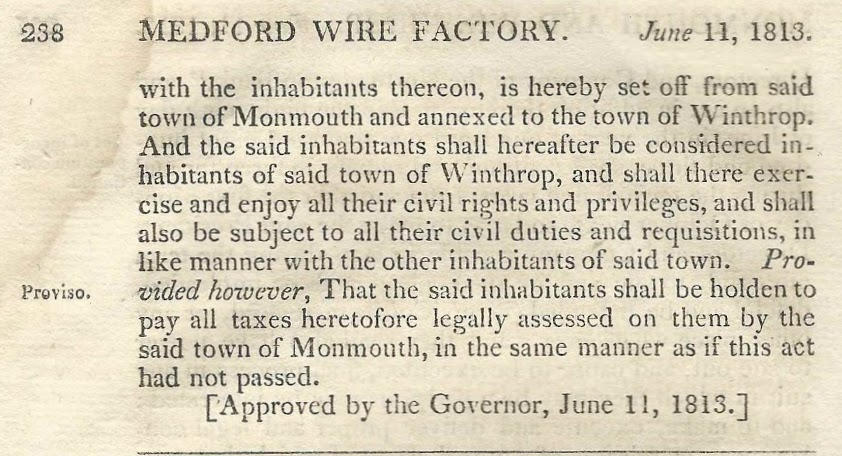 "Be it enacted by the Senate and House of Representatives in General Court assembled, and by the authority of the same, That the following described tracts of land, with the inhabitants thereon, be set off from the town of Monmouth in the county of Kennebeck, and annexed to the town of Winthrop in the same county, by the following described lines, to wit: beginning on a pond called Chandler's South Pond, where the line between great back lots, number twenty-one and twenty-two, as run by Obadiah Williams, strikes said pond; thence northerly on said pond to the south line of said town of Winthrop; thence west north-west about one mile and twenty-nine rods to the west end of lot number seventy-eight; thence on the easterly end of said lot to the south-east corner thereof; thence south, twenty-two and an [sic?] half degrees west, to the line between said great back lots, number twenty-one and twenty-two; thence on said lines easterly to the pond aforesaid.  And the said tract of land, with the inhabitants thereon, is hereby set off from said town of Monmouth and annexed to the town of Winthrop.  And the said inhabitants shall hereafter be considered inhabitants of said town of Winthrop, and shall there exercise and enjoy all their civil rights and privileges, and shall also be subject to all their civil duties and requisitions, in like manner with the other inhabitants of said town.  Provided however, That the said inhabitants shall be holden to pay all taxes heretofore legally assessed on them by the said town of Monmouth, in the same manner as if this act had not passed.  [Approved by the Governor, June 11, 1813.]

If anyone knows the current name of Chandler's South Pond, please leave a comment or contact me directly.  Thanks! 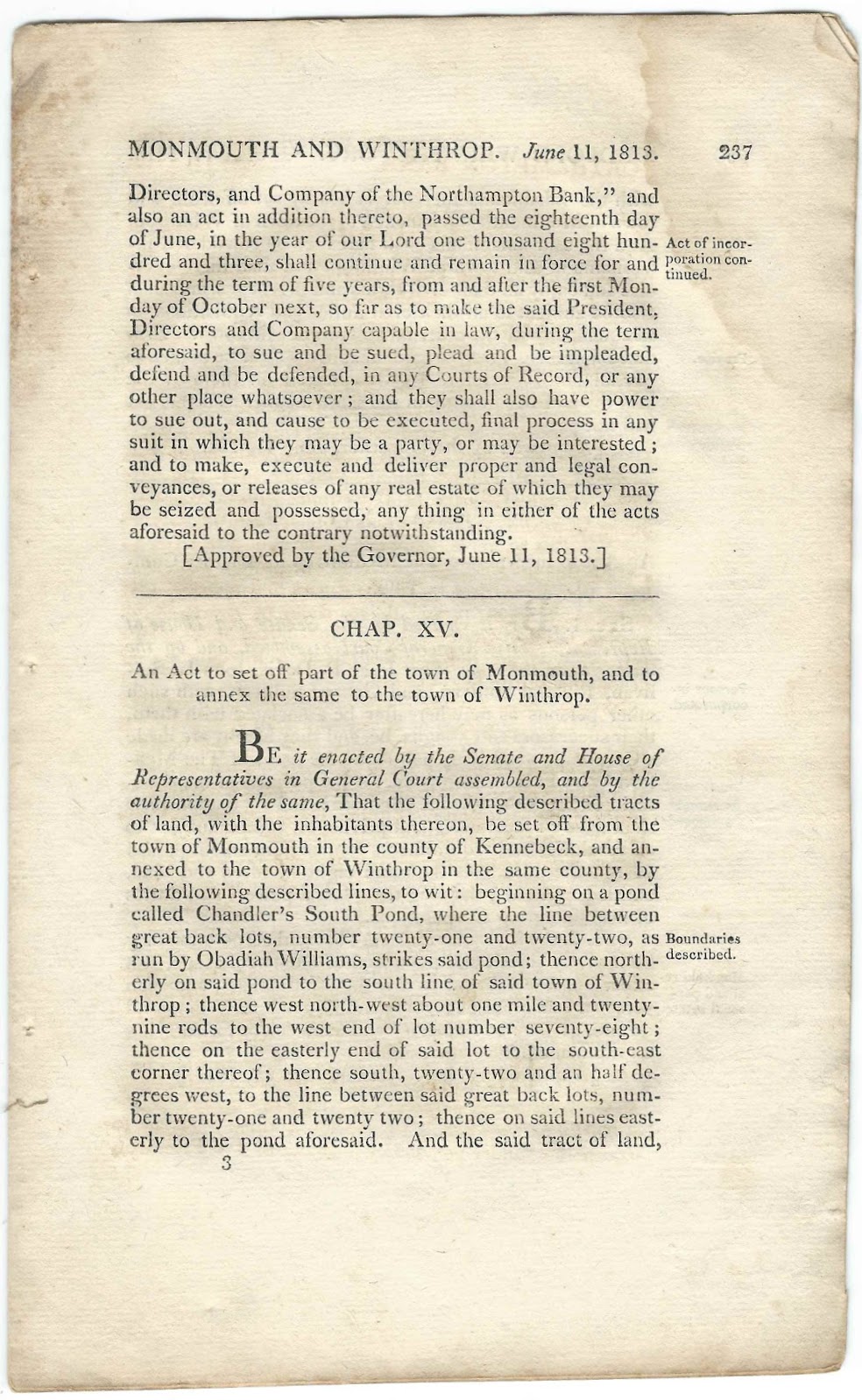 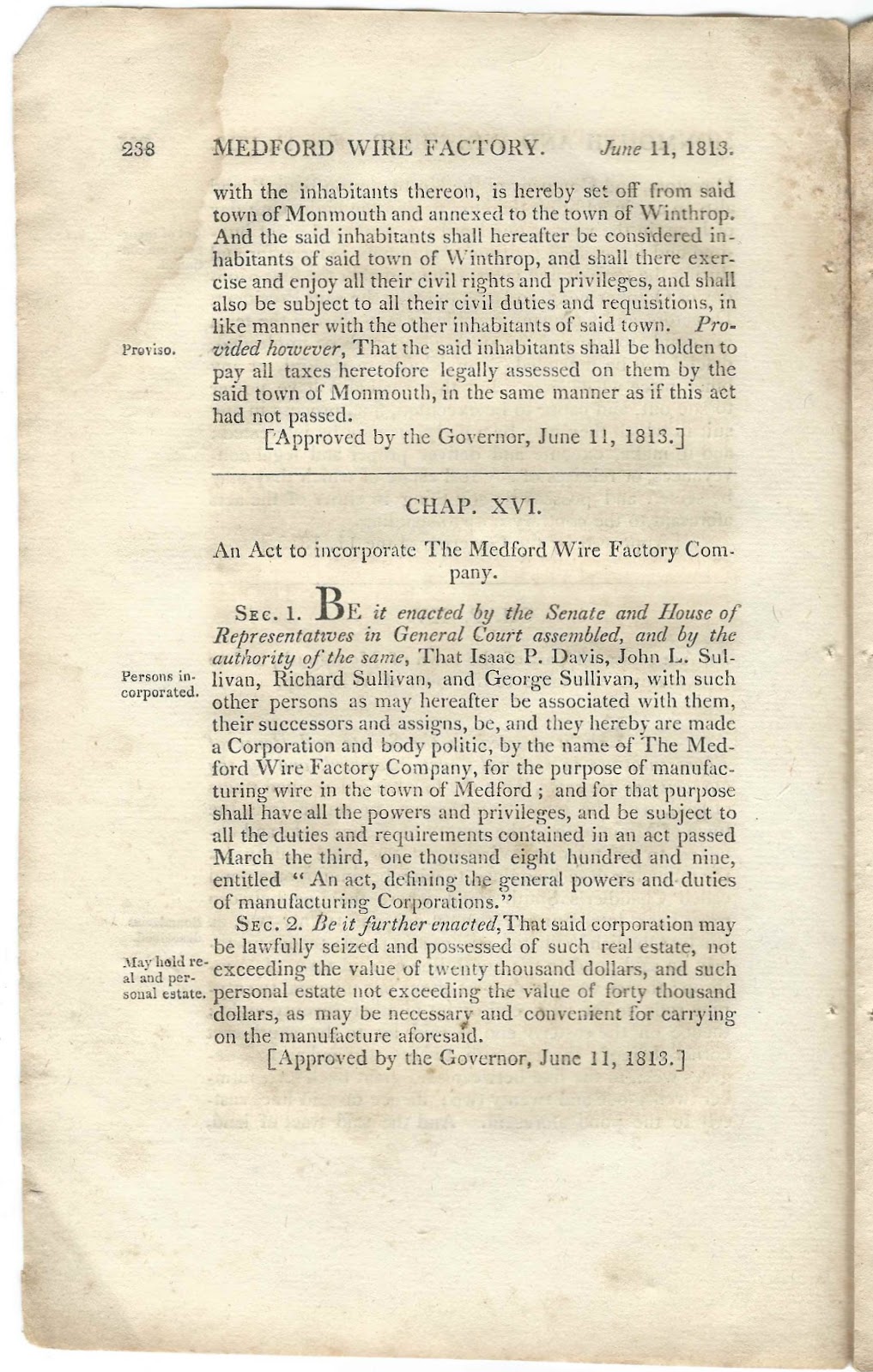