c1890s Photograph of Joseph Sheehan of Boston, Massachusetts, later a Judge; Photograph by Studio of Elmer Chickering of Boston 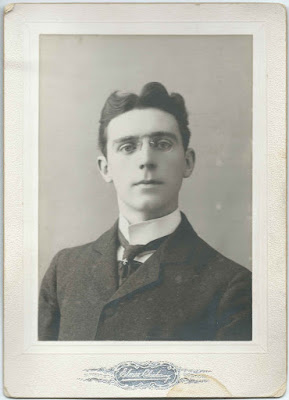 c1890s photograph of a young man identified on the reverse as Joseph Sheehan of 3 Cortes Street, Boston, Massachusetts.  The photograph was taken by the Elmer Chickering Studio at 21 West Street, Boston.  He was presumably Joseph A. Sheehan, who became a Judge.

Whether Joseph lived on Cortes Street  at the time the photograph was taken, or moved there later, I don't know.  The person who wrote the identification was apparently writing much later on. 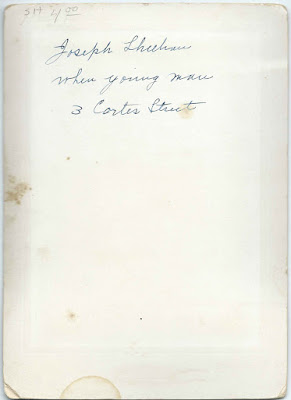 The mention of a Joseph Sheehan at 3 Cortes Street in the James Michael Curley Scrapbook was instrumental in singling Joseph A. Sheehan out from the several other Joseph Sheehans in Boston during the era.

The excerpt below comes from The Book of Boston: Fifty Years' Recollections of the New England Metropolis, by Edwin Monroe Bacon and published in 1916.  It mentions that Joseph A. Sheehan attended English High School and received his legal training from Boston University, where he received an L.L.G. degree in 1897 and an L.L.M. in 1916.  He married Mrs. Stella Gertrude Lombard in 1914. 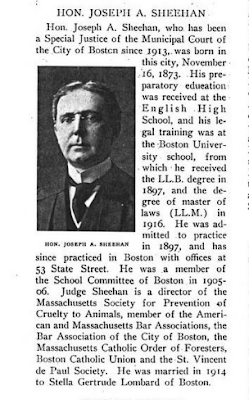 Stella was born 19 May 1869 at Woodside, Nova Scotia, daughter of William and Bridget Theresa Brady.  Stella's previous husband was James Clement Lombard, whom she married in 1898 at Kentville, Nova Scotia, and with whom she had two children, I believe.   James may have been the James C. Lombard who, a master mariner, died in the arms of his wife at New Orleans in 1912, as noted in the Charlotte News of North Carolina, in the issue of November 27, 1912.

It appears to me, at least, that the two photographs are of the same Joseph Sheehan.  If you feel that the Joseph Sheehan is another person, please leave a comment or contact me directly.

Posted by Pam Beveridge at 9:22 AM