1851 Certification that Seaman Isaac N. Sprague of Pembroke, Maine, is an American Citizen

Document inscribed on March 6 1851 by Daniel Kilby, Customs Collector of the District of Passamaquoddy, where he certifies that Isaac N. Sprague, an American Seaman and a native of Pembroke, Maine, about the age of 16, is a Citizen of the United States.

Isaac N. Sprague may have been Isaac Noble Sprague, born at Pembroke, Maine, son of William and Tamar (Clark) Sprague.  An index to a Maine birth record I haven't viewed myself gives Isaac Noble Sprague's birth date and place as September 22, 1834.  Other online references give him a birth date as September 22, 1836, but I can't find sources for these, so can't verify which is the correct year.

Isaac Noble Sprague is listed in several of the Great California Registers, and was still living in California as late as 1880, where he's enumerated on the Census of San Jose as farming, divorced and living in the household of his brother Levi Woodward Sprague and family.  In the 1870 Census, Isaac was living at Santa Cruz, California, either with Levi and brothers Cyrus and Benjamin or adjacent to them.  Levi was listed as a teamster.    I haven't yet found information on Isaac's marriage, but it likely occurred in the 1870s.

According to a mention in Eastport and Passamaquoddy: A Collection of Historical and Biographical Sketches, written by E. E. Shead and published in 1888, Daniel Kilby was born May 21, 1791 at Perry, Maine, the son of William and Mary (Wilder) Kilby.
Daniel served in the militia during the War of 1812.  He and a friend went from the mainland to nearly Moose Island on the fateful day when a British fleet arrived and captured Fort Sullivan, the town and the island.  He brig which had sailed to the rear of the island near the best approach to the mainland to prevent any escapes.  After being searched, Daniel and his friend, and others, were let go.

After the war, Kilby became a shipowner and merchant.  In 1849, President Zachary Taylor appointed Kilby to the post of customs collector for the District of Passamaquoddy; he served until the administration of President Franklin Pierce in 1853.  Kilby died at Eastport, Maine, on January 3, 1860.

Daniel Kilby married Joanna Hobart, who was born July 12, 1799 and predeceased Daniel on July 26, 1848.  Her parents were Isaac Hobart and Joanna (Hersey) Hobart.  Daniel and Joanna are buried in Hillside Cemetery at Eastport, Maine, with at least one of their children, Isaac Hobart Kilby.

From Eastport and Passamaquoddy: A Collection of Historical and Biographical Sketches: 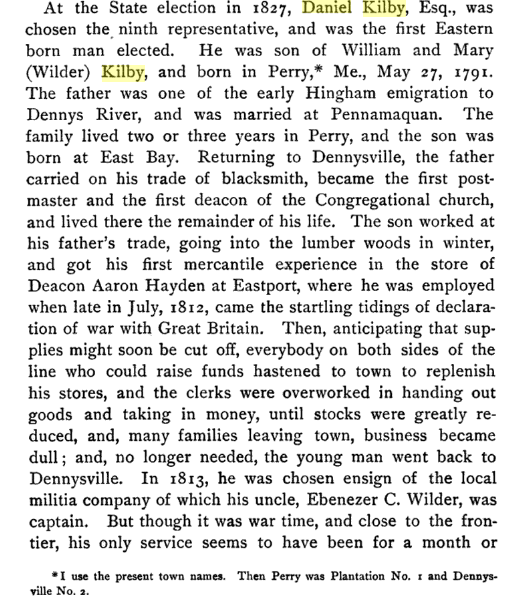 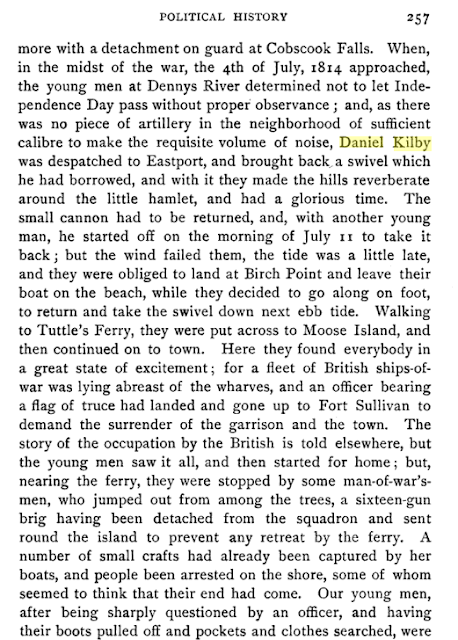 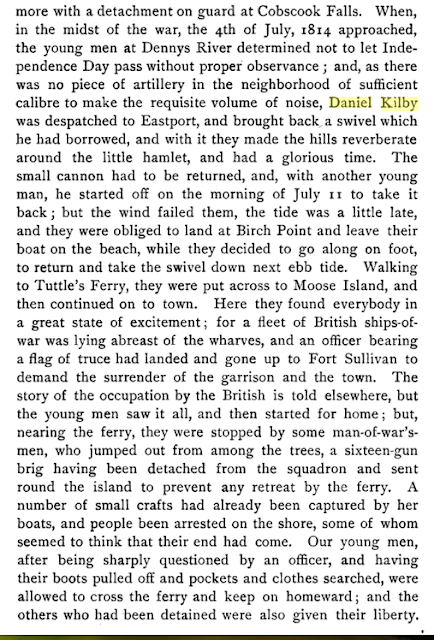 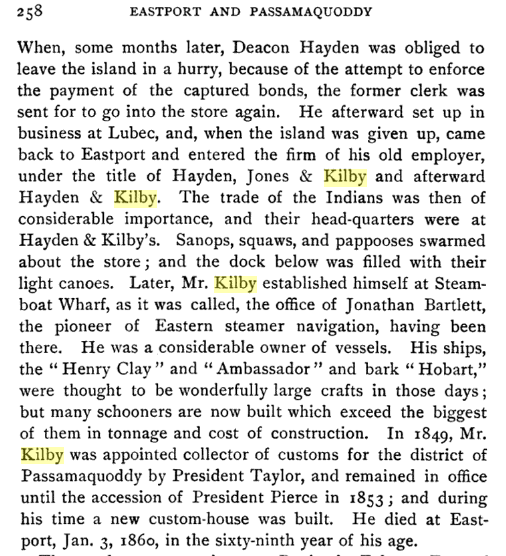 Pembroke, Maine, is located along Cobscook Bay, which is an estuary off Passamaquoddy Bay.

Posted by Pam Beveridge at 3:46 PM