1882 Document Where John B. Huckins of Madbury, New Hampshire, Promised to pay Aaron Young $16.90 plus Interest

Note:  A reader has left a comment noting that John B. Huckins and Aaron Young were cousins, the grandchildren of Clement Daniels and Esther (Danielson) Daniels.

April 29, 1882 handwritten document where John B. Huckins promised to pay Aaron Young the amount of $16.90 plus interest.  Nothing written on the reverse.

John B. Huckins was presumably the John B. Huckins born October 9, 1827 at Madbury, New Hampshire, son of Robert Levi Huckins and Mary (Daniels) Huckins.  About 1851, as implied in the 1900 Census, this John married Mary A. Morrison.

Mary (Morrison) Huckins died in 1906, and John B. Huckins in 1912.  They're buried in the Pine Grove Cemetery at Barrington, New Hampshire.

Among the possible candidates for Aaron Young is the Aaron Young born June 16, 1827 at Barrington, New Hampshire, son of Aaron Young and Lydia (Daniels) Young.   On May 5, 1853 at Manchester, New Hampshire, as noted in a record from the collection New Hampshire Marriage Records, 1637-1947,  Aaron Young married Louisa Blaisdell Page, daughter of Deacon Osgood Page and Martha W. (Blaisdell) Page.  Louisa's birth record notes that she was born July 2, 1831 at Weare, New Hampshire.

A short biography of this Aaron Young, shown below, appeared in New Hampshire Men: A Collection of Biographical Sketches, with Portraits, of Sons and Residents of the State who Have Become Known in Commercial, Professional, and Political Life , compiled by George Higgins Moses and published in 1893.  Aaron worked at the Custom House at Portsmouth and as a special agent of the Treasury Department for New England. 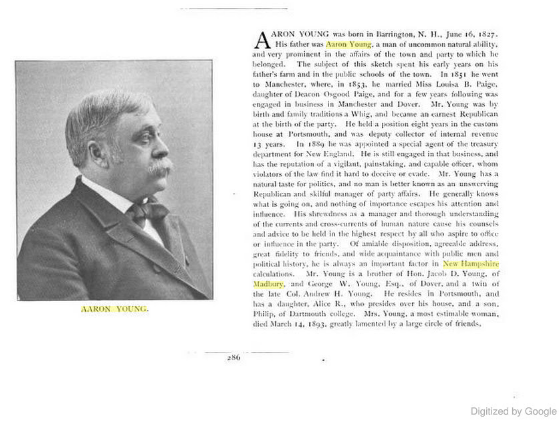 Louisa died in 1893 and Aaron in 1903; they're buried in the Pine Hill Cemetery at Dover, New Hampshire.