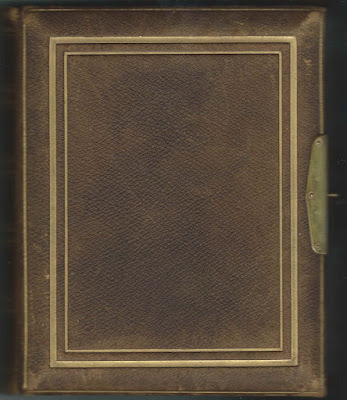 See another post that features the 1869-1880s autograph album of Adelia Caroline (Carleton) Talpey, with autographs collected around the world, including from people involved in the sailing trade from England, China and Pitcairn Island.  While at Pitcairn Island, the Talpeys befriended Ernest Harwood Christian and took him with them on a round-the-world voyage.

Back to the photograph album - the title page: 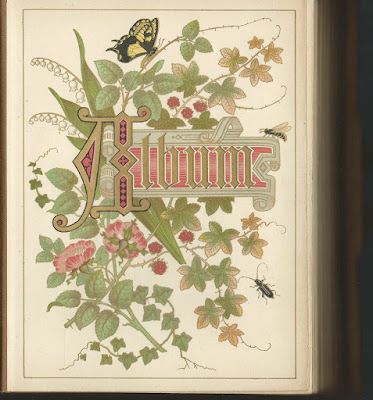 Below, the presentation page of the photograph album:  Capt. Mrs. Talpey, a reminder of Hull, with best wishes from D. Richard Johnson, 7 June 1881 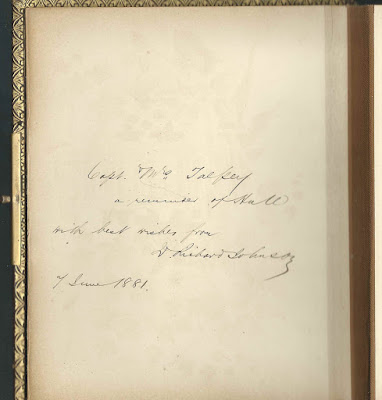 The album contains a scrap of family history and provenance written in the 1983.  Whether or not the original photographs were removed and replaced by those of another family, as suggested in the handwriting, I don't know.  But the presence of the photographs of Betsey (Crowell) Carleton Washburn and the photograph taken at Hull, England, would seem to indicate otherwise, thankfully.

The photograph album measures approximately 8-1/2" by 7" by 2" and contains 13 photographs, most of them unidentified.   The photographs were taken by studios at:
Perhaps the photograph taken by the Turner and Drinkwater studio at Elm Tree House, Anlaby Road, Hull, England, depicts D. Richard Johnson himself. 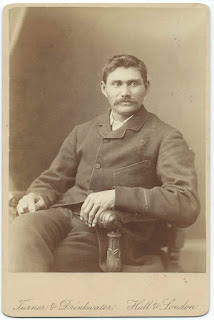 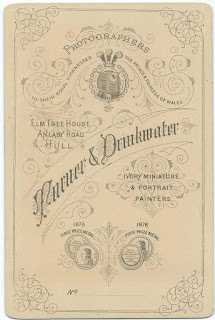 There are two photographs each of Rev. Job Washburn and second wife Betsey (Crowell)  Carleton Washburn of Rockport, Maine.  Betsey's first husband was William Carleton; she and William were the paternal grandparents of Adelia Caroline (Carleton) Talpey.  Rev. Washburn, according to information written on the reverse of his photographs, was the first minister at the Rockport Baptist Church.

The photographs of Rev. and Mrs. Washburn are identical but with different colored backs, as shown below. 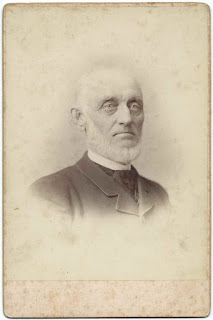 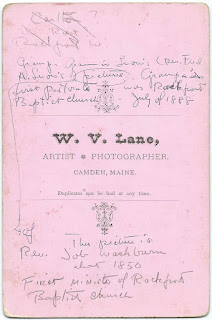 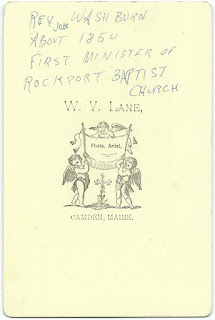 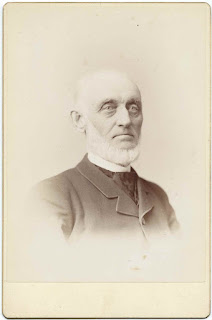 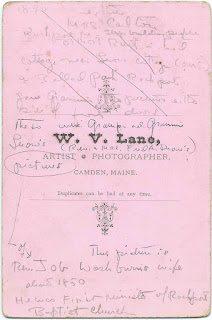 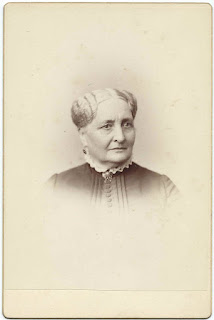 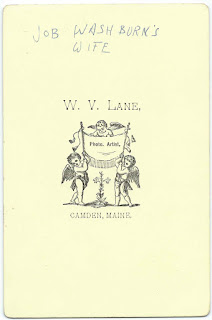 Another photograph, taken by the Taber studio in San Francisco on 8 Montgomery Street, depicts Aunt Mary (True).  Her photograph is opposite that of a man of an age similar to hers and possibly her husband; sadly, his photograph is unidentified.  Hopefully a reader familiar with the genealogy of the Rockport, Maine, area, will recognize the couple and leave a comment with their identity. 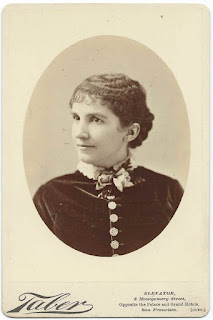 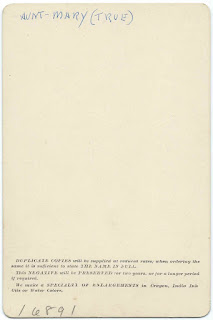 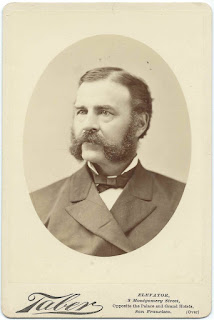 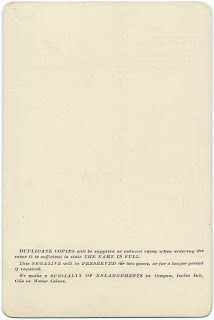 Another photograph was taken at the Taber studio, that of an older woman, perhaps the mother of Mary or her husband. 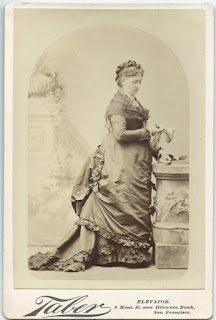 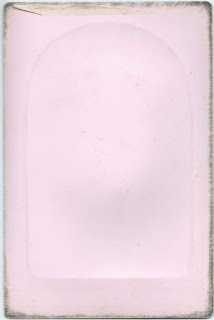 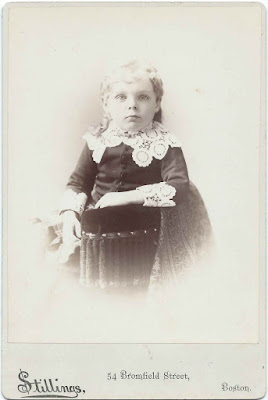 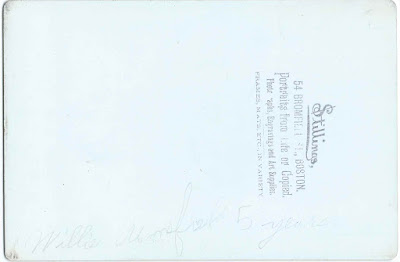 Photographs, taken by the Solano Art Studio of J. G. Smith of Vallejo, California, of two siblings or two photographs of the the same child: 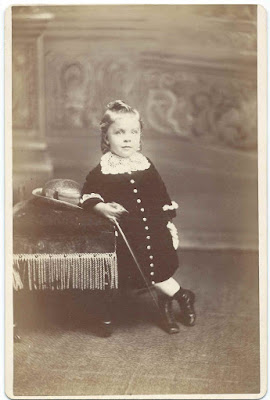 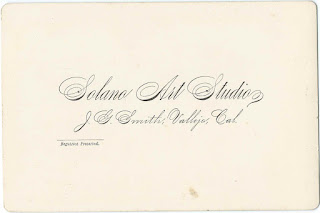 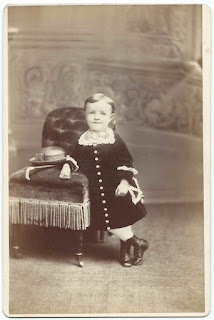 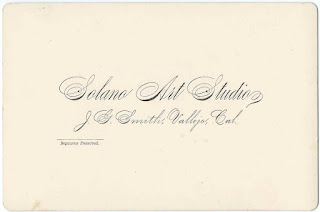 Photograph of a child taken by the Towne studio of Portland, Oregon: 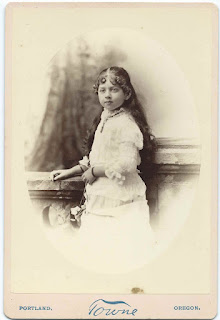 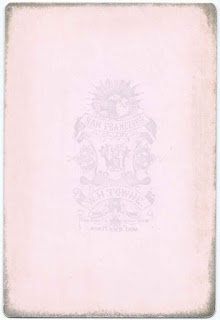 Photograph of a young woman, taken by the Elmer Chickering studio of 21 West Street, Boston, Massachusetts: 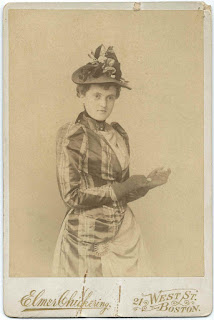 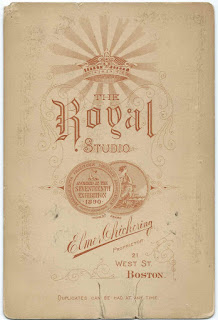 If you recognize any of these photographs from your family photographs and/or research, please leave a comment or contact me directly.