The deed was witnessed by Life Young and Asa Merrill in the presence of Justice Peace Life Merrill and recorded by John Page.

An enlargement of the description of the parcel:  [hopefully a reader with knowledge of Piermont, New Hampshire, will shed some light on these landmarks.]

The reverse of the deed and an enlargement of the handwriting on the reverse:

James S. Kimball was presumably James Shepard Kimball, born November 17, 1785 at Enfield, New Hampshire, son of Ebenezer and Lydia (Welch) Kimball.  On February 7, 1811 at Dunbarton, New Hampshire, James married Ruth Burnham, daughter of John Burnham and Sarah (Andrews) Burnham.   They had seven children, before James died in 1857 and Ruth in 1879.  They had a son James L. Kimball, in case the middle initial is L rather than S, but I doubt that, as James Lawrence would have been only age 16 in 1832.

Aaron P. Gould, Buyer
A record in the collection New Hampshire, Death and Burial Records Index, 1654-1949, indicates that Aaron P. Gould, age 74 and widowed, died in June 1882 at Piermont, New Hampshire.  A mention in the book The Family of Zaccheus Gould of Topsfield, by Benjamin Apthorp Gould and published in 1895, gives Aaron's birth date as March 29, 1808, his death date as June 25, 1882 and his middle name as Pressey.  He was the son of Amos and Rebecca P. Gould and was a postmaster at Piermont, New Hampshire.

See other posts that feature: 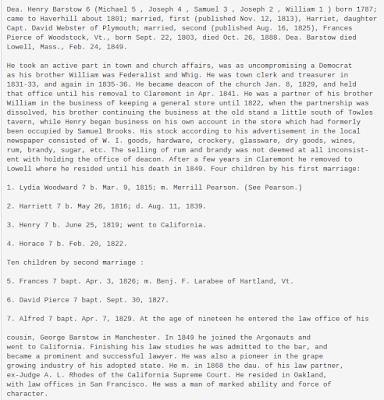 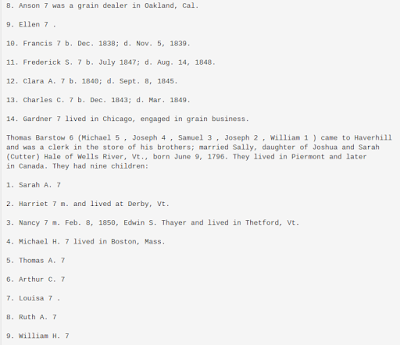 Life Young was born September 14, 1786 at Lisbon Township, New Hampshire, the son of Jesse and Ruby (Richardson) Young.    On June 27, 1809 at Royalton, Vermont, Life married Lucy Curtiss, daughter of Samuel and Zipporah (Morgan) Curtiss.  About 1840, the family moved to Indiana, where Life died in 1844 and Lucy in 1863.  They and other family members are buried in the Charlestown Cemetery at Charlestown, Indiana.

Asa Merrill was possibly the Asa Merrill who was for a time the postmaster at Piermont, New Hampshire in the 1830s.  And he may have been the Asa Merrill who moved to Illinois about 1836 and became a postmaster at Udina, Illinois.  This Asa was born February 18, 1793 or 1794, the son of Richard Merrill and Abigail (Hall) Merrill, and married Rebecca Cummings at Tetford, Vermont, on September 4, 1821.  Asa died in 1869 and is buried in the Udina Cemetery with Rebecca, who died in 1883.

If a reader has more information on Asa Merrill (1794-1869) or feels that the Asa Merrill who witnessed the deed was another person, please leave a comment or contact me directly.

If you have corrections and /or additions to any of the information above, please leave a comment or contact me directly.