Deed signed on August 1, 1871 where Benjamin Dodge, Jr., of Bridgton, Maine, purchased a parcel of land in Bridgton from Abi Smith of Denmark, Maine.  The deed was signed by Abi Smith in the presence of Justice of the Peace S. M. Harmon, and was recorded on January 4, 1887 in the Cumberland County Registry of Deeds by Register Storer S. Knight.

Perhaps a reader will have a theory on why the deed was not recorded until 1887.

The parcel is described as part of lot numbered seven in the thirteenth range of lots in Bridgton; the parcel abuts land owned by F. J. Littlefield, or F. I. Littlefield, and Fogg & Billings.

Sources
Abi Smith was presumably Abi (Trumbull) Smith, born at Rumford, Maine, on April 16, 1832, daughter of Joseph Trumball [or Trumbull] and Hannah (Howe) Trumball/Trumbull.  She was the widow of Andrew H. Smith.  Abi died at Denmark, Maine, from a fall and pneumonia, on January 27, 1916.  This information is gleaned from her Maine birth record, compiled from an old record, and her death record.

Andrew, the father, enlisted as a private in Company K of the 20th Maine Infantry Regiment on August 29, 1862 and mustered out on June 15, 1865.   He died not long after the war, in 1867 and is buried in the Denmark Village/Berry Cemetery at Denmark, Maine, with Abi, who, as noted above, died in 1916 and daughter Rosabelle, who died in 1879 at the age of 19.  Whether Andrew was debilitated from his war service or died from another cause, I don't know.

Storer S. Knight, Register of Deeds for Cumberland County, Maine, who recorded the deed in 1887, was Storer Seth Knight, born July 12, 1841 at Scarborough, Maine, son of Josiah Knight and Sarah (Bangs) Knight.  He served in the Civil War and was wounded in the battle of Cedar Creek in 1864.

On June 2, 1869 at Portland, Maine, Storer married Helen Elizabeth Green, daughter of Charles and Catherine Green.  Helen was the widow of George Washington Leavitt, who died in the Battle of Bull Run in 1862.  Helen had one child from her first marriage and three children from her marriage to Storer Seth Knight.  Storer Seth Knight and Helen Elizabeth (Green) Knight are buried in Evergreen Cemetery at Portland, Maine.

The excerpt below is taken from Genealogical and family history of the state of Maine, Volume II, compiled by George Thomas Little, 1857-1915; Henry Sweetser Burrage; and Albert Roscoe Stubbs, published in 1909. 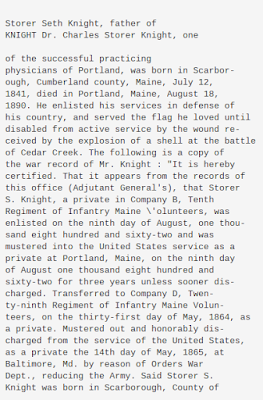 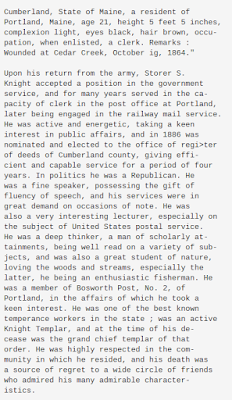 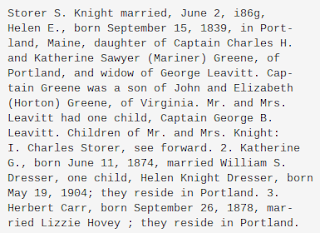 Posted by Pam Beveridge at 2:22 PM