An enlarged image of the description of the parcel:

The deed was witnessed by John A. Page and Samuel Cartland; the latter also signed as Justice Peace.  The reverse shows the signature of John Page, Reg., presumably Register of Deeds, who may have been John A. Page.

John Osgood of Haverhill, New Hampshire may have been the noted clockmaker John Osgood, who was born June 20, 1770 at Andover, Massachusetts, son of Col. John Osgood and second wife Huldah (Frye) Osgood.  Col. Osgood died about a year after son John's birth, leaving his wife to rear children from two marriages all on her own.

Another biography of John Osgood (1770-1840) is shown on the Delaney Antique Clocks website.

Intriguingly, both biographies mention a farm owned by John Osgood (1770-1840), in addition to his village home and workshop.  This farm was located on the eastern side of town and was managed by William Porter, a brother to John's wife Sarah (Porter) Osgood. Perhaps the parcel covered by this deed was part of that farm.  Clockmaker John Osgood died July 29, 1840 from consumption.

Nothing on the bottom half of the reverse.

Aaron P. Gould was presumably Aaron Pressey Gould who was born in 1808 and died in 1882.

A record in the collection New Hampshire, Death and Burial Records Index, 1654-1949, indicates that Aaron P. Gould, age 74 and widowed, died in June 1882 at Piermont, New Hampshire.  A mention in the book The Family of Zaccheus Gould of Topsfield, by Benjamin Apthorp Gould and published in 1895, gives Aaron's birth date as March 29, 1808, his death date as June 25, 1882 and his middle name as Pressey.  He was the son of Amos and Rebecca P. Gould and was a postmaster at Piermont, New Hampshire. 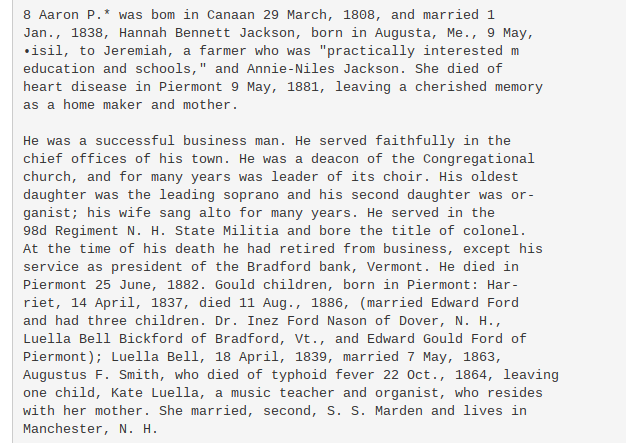 See another post that features the $1000 bequest left by Aaron Pressey Gould to the Parsonage Building Committee of the Congregational Church at Piermont, New Hampshire.

Samuel Cartland was presumably the Samuel Cartland who was born at Lee, New Hampshire, in 1791 [or 1797 as noted in the except below], possibly the son of Elijah and Abigail Cartland.  Samuel graduated from Dartmouth College and served two terms as president of the New Hampshire Senate.  The excerpt also notes that he died in Maine in 1840, but I'm not sure of that date either, as there is an Hon. Samuel Cartland, born in 1791 and who died in 1852, buried in the Crowell Cemetery at Exeter, Maine.

From the History of the Town of Haverhill, New Hampshire, written by William F. Whitcher and published in 1919:

John A. Page, Witness and Registrar

Posted by Pam Beveridge at 2:25 PM