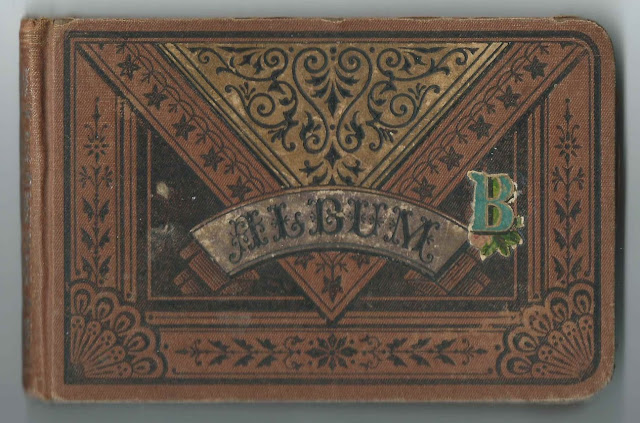 1883-1885 autograph album of Miss Sarah Boerr of Grand Rapids, Michigan.  Records of her family give variant spellings of their surname: Boer, Borr, Bor. 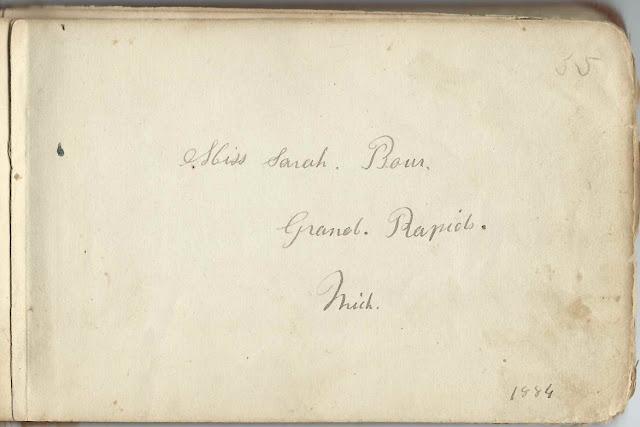 The album measures approximately 6-1/4" x 4" and contains the sentiments of nearly 60 of Sarah's relatives, friends and schoolmates.  It also contains a letter concerning the upcoming funeral of Peter Boomker, who was killed in 1923 as the result of a fall at work.  Sarah had married into the Boomker family. 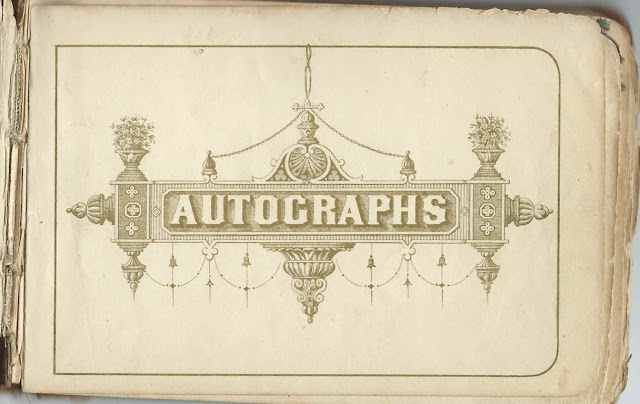 Sarah Boerr/Boer/Borr/Bor was born March 9, 1862 at Zeeland, Michigan, the daughter of Hendrik Bor and Bastiannje (Leenheer) Bor.  Presumably Hendrik had an earlier family in the Netherlands; whether Sarah ever had contact with her half-siblings I don't know.  She had, I believe, at least five full siblings, some of whom or whose spouses inscribed pages in her album. 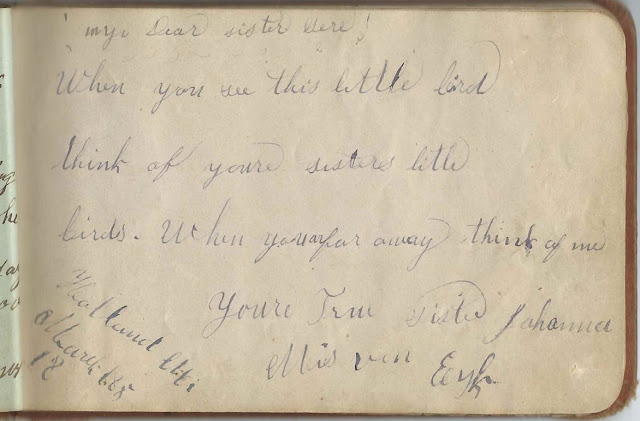 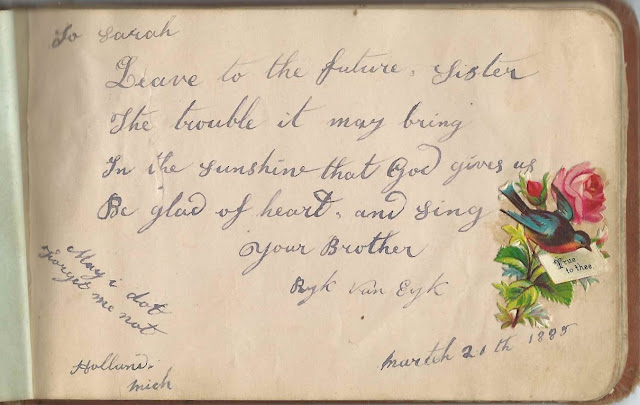 Sarah's sister Alberdina "Delia" Borr inscribed a page on December 19, 1883, before her marriage to John Mulder (Mueller) in 1889. 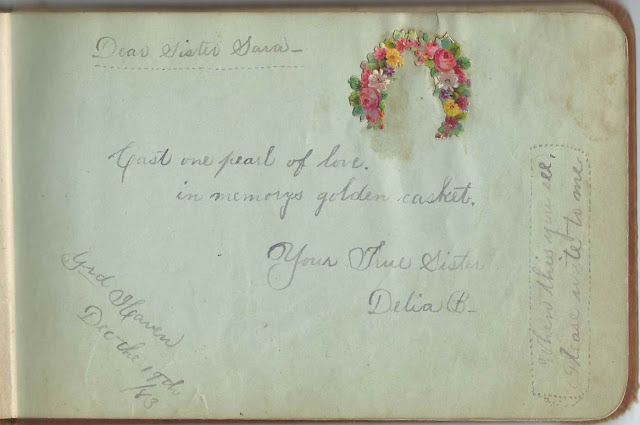 Sarah's sister Annie Marie Borr signed a page on January 10, 1885, before her marriage to John Hieftje in 1889. 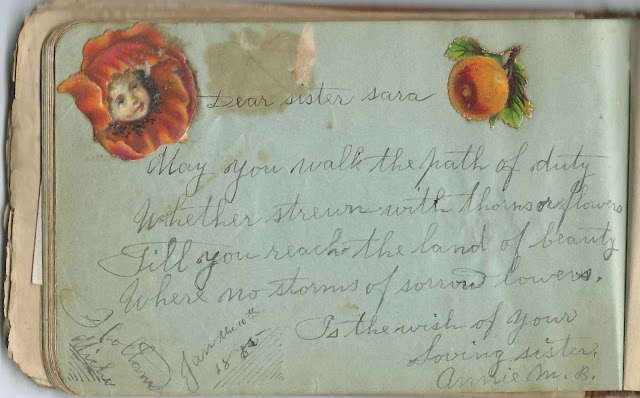 The "loving sister Gertie" who inscribed a page may have been Grietje (Van Dyke) Bor, wife of Sarah's brother Pieter Bor. 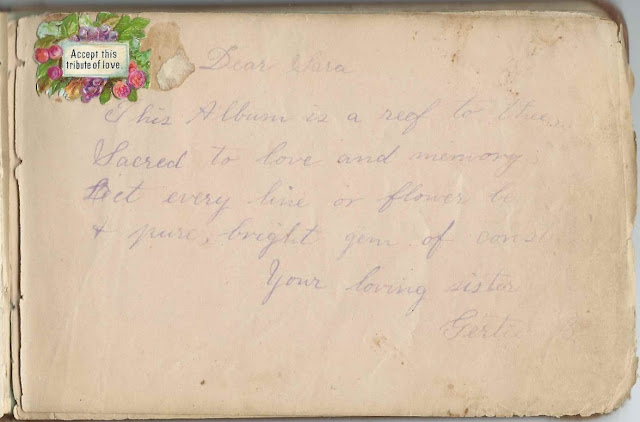 I believe that the J. Meulendyk who signed a page at Ebenezer Parsonage on April 16, 1884 was Sarah's pastor. 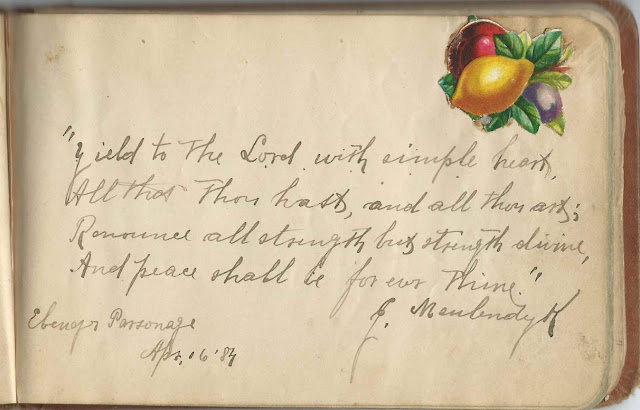 About 1888 Sarah married Johannes Jacobus Boomker, "John", son of Jan Wolters Boomker and Grietje Johannes (van der Molen) Boomker.  John was born in the Netherlands about 1863 and came to the United States when he was a young child.  As noted above, he was related to Peter Boomker who died in a construction accident in 1923 and whose funeral was the subject of a letter found tucked in the album. 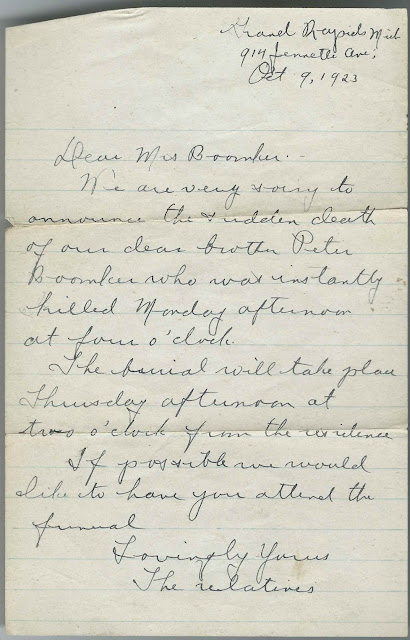 If you have corrections and/or additions to the information above, or information on any of the signers listed below, please leave a comment or contact me directly.
A reader has provided a translation for the page below, inscribed by friend Jennie If you can translate the page below, or at least provide the name of the inscriber, I would be very grateful.  [Update: the female signer might have been Jennie Schuls.]
Geliebter Freundin
So wie die Rosen blühen
So blühe auch dein Glück,
und wenn du Rosen siehst,
So denk an mich zurück.
Ich bin und bleibe deine Freundin Jennie ...
In English:
Dear(est) friend,
Just as the roses bloom, may also bloom your fortune,
And if you see roses, think back of me.
I am and will stay your friend Jennie .... 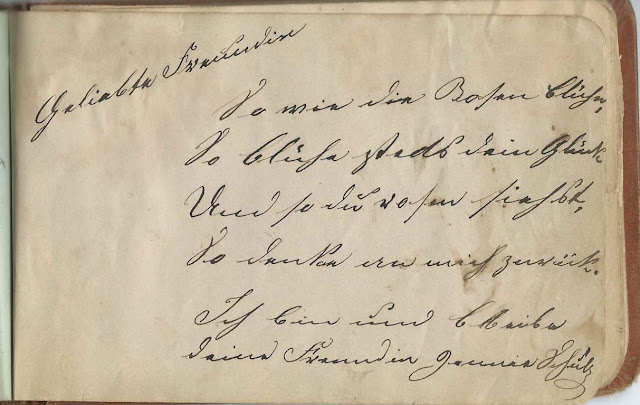 
Signers in the album   [Note: Given names within specific surnames may not be in alphabetical order.]