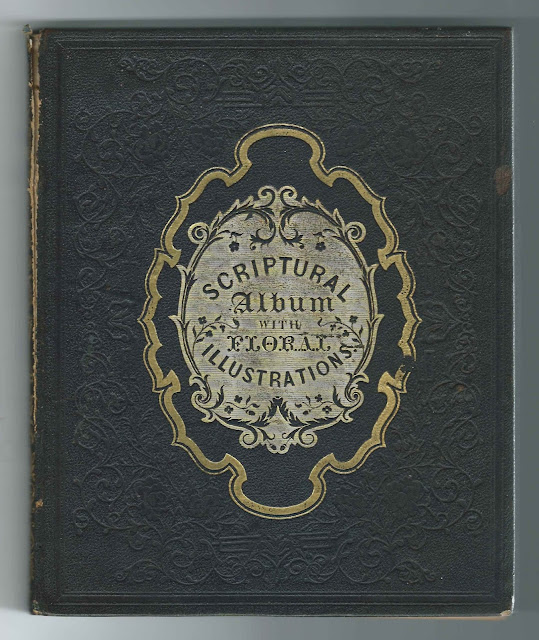 1846-1847 autograph album of Hattie Bliss Jordan of Thomaston, Maine, with some autographs acquired while she was a student at North Yarmouth Academy.

Her pastor, R Woodhull, who inscribed a page at Thomaston, Maine, on July 11, 1847, was considerate enough of a researcher some 167 years in the future to work Hattie's full name into an acrostic.  He was Richard Woodhull, born in Connecticut in 1802, son of Captain Abraham Cooper Woodhull and Eunice (Sturges) Woodhull.  He married Sarah Forbes of Bangor, Maine. 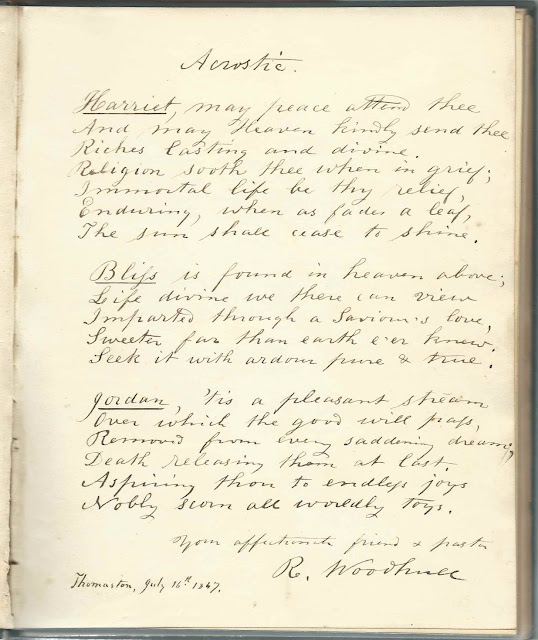 The album measures approximately 7-3/4" x 6-1/2" and contains the sentiments of 23 of Hattie's pastor, teacher, friends, schoolmates and possibly relatives.  An alphabetical surname list and an alphabetical list of the signers, together with any personal information they offered, appear at the end of this post.  Sadly, many people signed with first names only or initials.

The album is a beauty, printed by J. C. Riker and containing six hand colored engravings of flowers, with black and white background scenes.  The title page, below, one of the more muted designs. 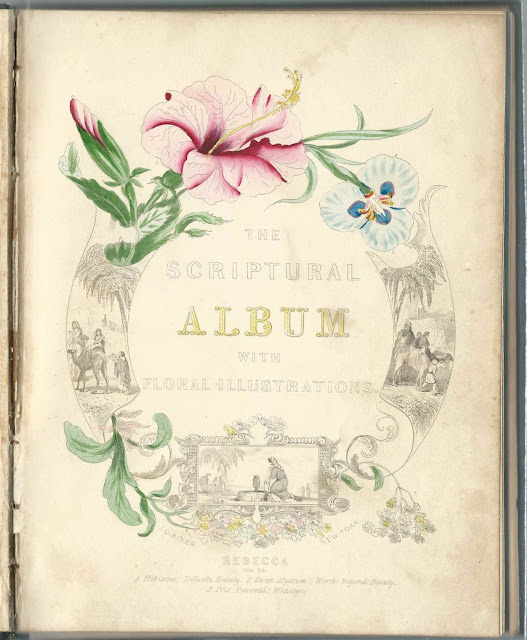 Harriet Bliss Jordan, "Hattie", was born April 27, 1831 at Thomaston, Maine, the daughter of Capt. Oliver William Jordan and Susan C. (Oakes) Jordan, both Thomaston, Maine, natives as well.  Capt. Jordan was a shipmaster and, after he gave up the seafaring life, a banker. 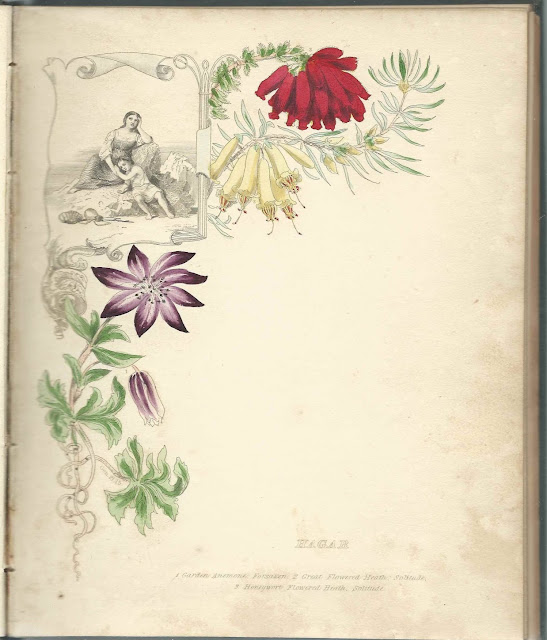 Harriet had, I believe, eight siblings, but I don't know if any of them signed pages in her album.  A family researcher might have better luck looking at the list of the signers at the end of this post for likely prospects among those who didn't give their surname or who used a married name. 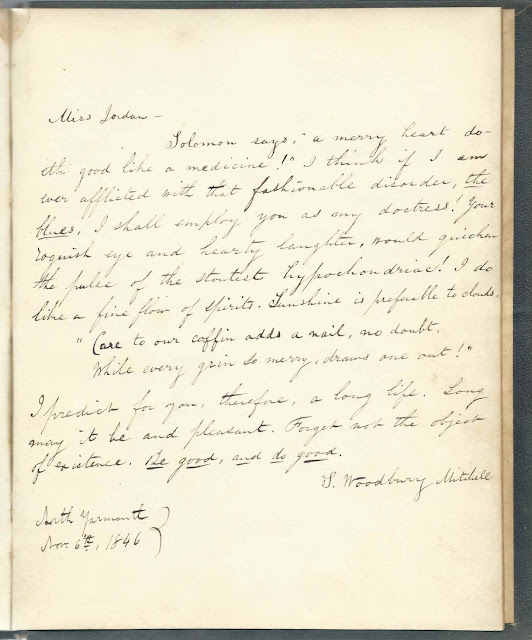 I wonder if Harriet Bliss Jordan was the Harriet who was living at Saco, Maine, at the time of the 1850 Census and apparently working at a mill.  It doesn't seem likely that the daughter of a sea captain and banker would be working at a Saco, Maine, mill, but I suppose it's possible. 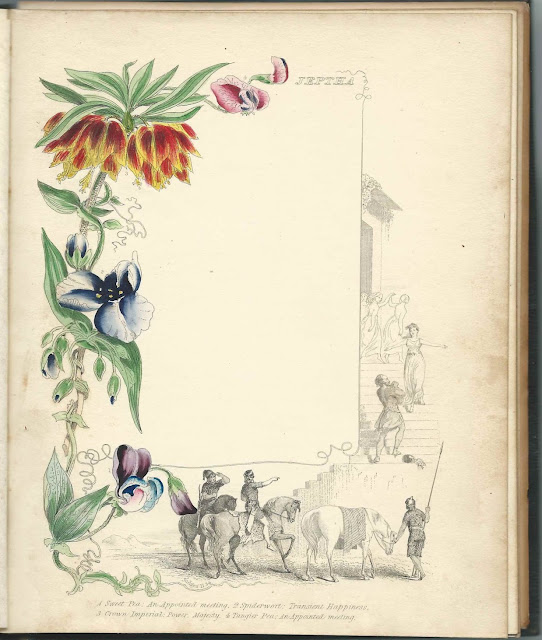 On 30 May 1853 at Thomaston, Maine, Hattie married Captain Raymond Leeman Gillchrist, son of Capt. Joseph and Sarah (Carney) Gillchrist.  Hattie's happy days were not to last long, for she died at New Orleans, Louisiana, on February 11, 1854, from natural causes, from the climate or from childbirth, I would like to know. 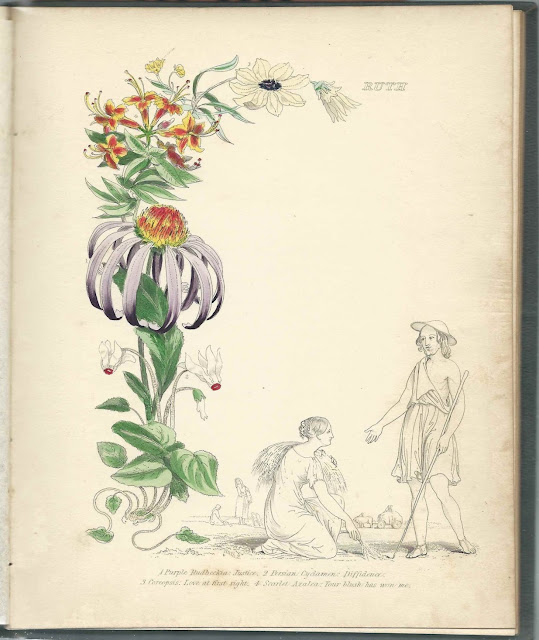 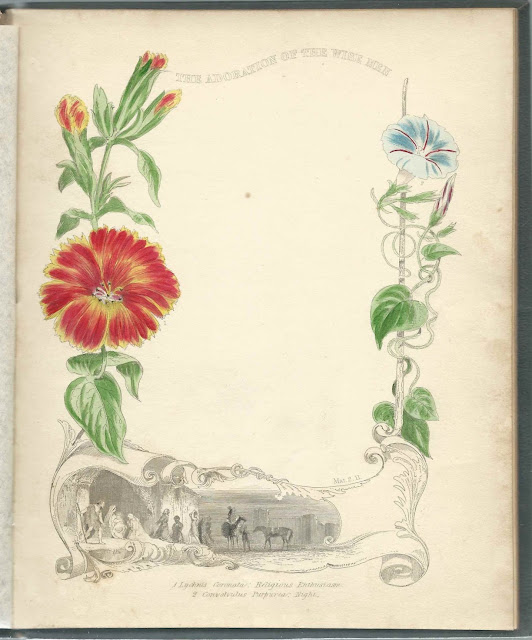 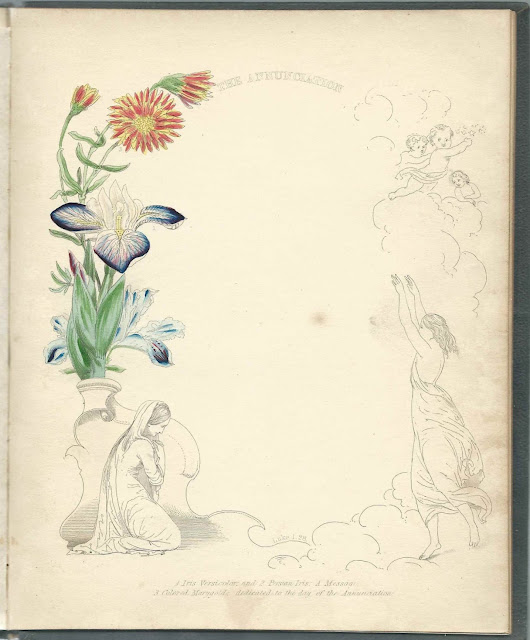 Posted by Pam Beveridge at 1:39 PM