Charles Dudley Warner's 1874 Perspective on the Difficulty of Sailing Past Campobello into Eastport, Maine - But a War?

An interesting perspective by Charles Dudley Warner (1829-1900) on the problem that Campobello Island in New Brunswick, Canada, and the extreme tides in Passamaquoddy Bay have always posed for mariners headed to Eastport, Maine.
Included in Warner's Baddeck and That Sort of Thing, published in 1874.  A later printing can be read on Archive.org.
Warner's published sentiments apparently predate 1874, perhaps by seven years or more, as he mentions the British several times, and England once, but not the Dominion of Canada, formed in 1867. In addition, by the time of the publication of Warner's book, the "flag and cannon", indicating Eastport's Fort Sullivan, had been decommissioned the year before. 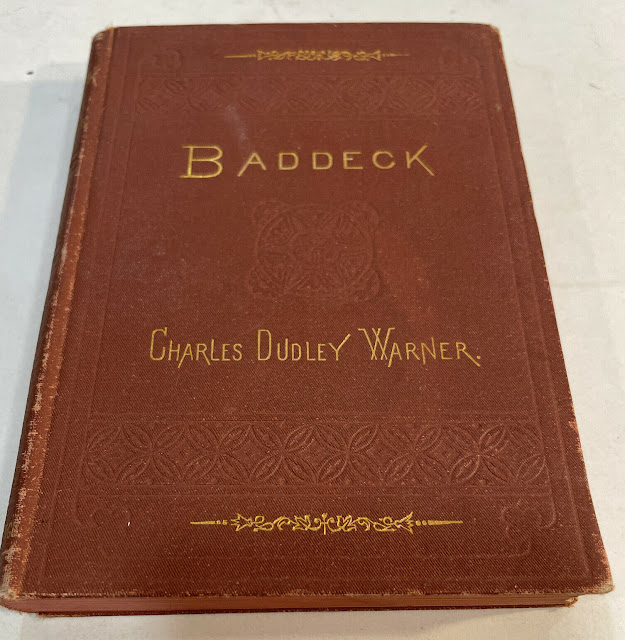 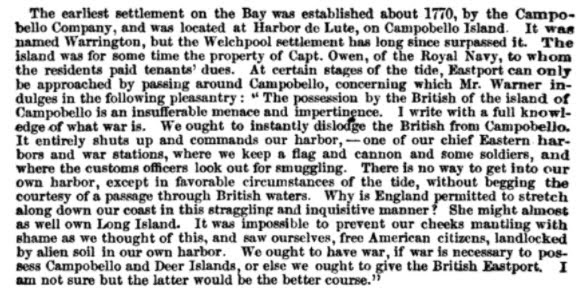 The possession by the British of the island of Campobello is an insufferable menace and impertinence. I write with a full knowledge of what war is. We ought to instantly dislodge the British from Campobello. It entirely shuts up and commands our harbor, - one of our chief Eastern harbors and war stations, where we keep a flag and cannon and some soldiers and where the customs officers look out for smuggling. There is no way to get into our own harbor, except in favorable circumstances of the tide, without begging the courtesy of a passage through British waters. Why is England permitted to stretch along down our coast in this straggling and inquisitive manner?  She might almost as well own Long Island. It was impossible to prevent our cheeks mantling with shame as we thought of this, and saw ourselves, free American citizens, landlocked by alien soil in our own harbor.  We ought to have war, if war is necessary to possess Campobello and Deer Islands, or else we ought to give the British Eastport. I am not sure but the latter would be the better course."
Taking the other course into Eastport, along Deer Island, would have put Mr. Warner through the Old Sow, the world's second largest whirlpool, which, depending on the tide, would have put on a real show.
As for Warner's option of giving Eastport to the British: deja vu - the British had taken Eastport in 1814 during the War of 1812 and were persuaded to return it to the United States in 1818 only after lengthy post-war negotiations.
During the British occupation, Fort Sullivan, which was constructed in 1808, was renamed Fort Sherbrooke, in honor of Sir John Coape Sherbrooke, then military commander of the Provinces of Nova-Scotia, New-Brunswick, and their Dependencies, including the Islands of Newfoundland, Cape Breton, Prince Edward and Bermuda. He later became Governor General of British North America.
In 1818, with the British evacuation, the fort was once again Fort Sullivan.  Still standing are the remains of a powder house built by the British in 1814, shortly after their occupation, and a building constructed in the early 1820s, the North Officers' Quarters, known locally today as "The Barracks".
Posted by Pam Beveridge at 8:24 AM