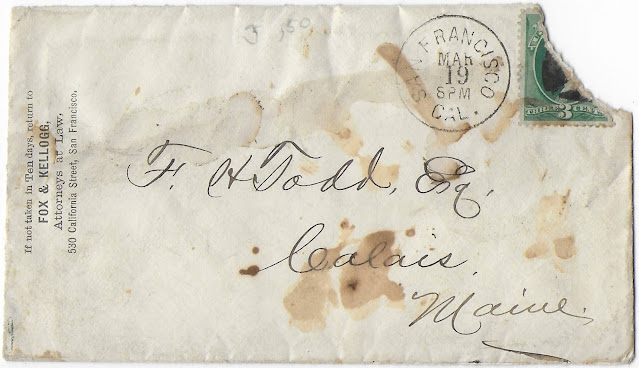 1881 letter from the law firm of Fox & Kellogg in San Francisco, California, to merchant and lumberman Freeman Hale Todd in Calais, Maine. 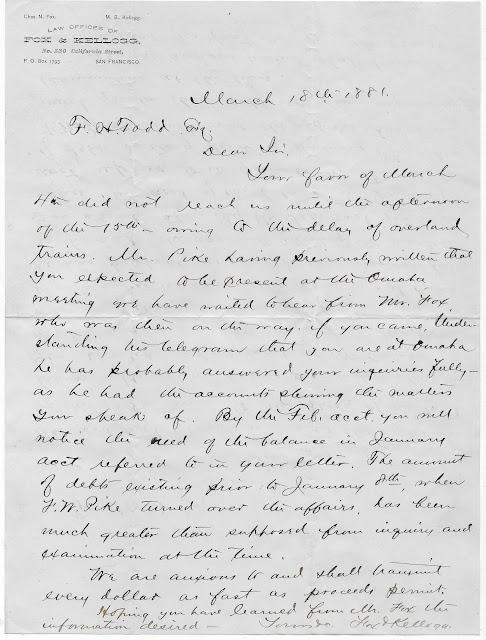 Transcription
March 18th 1881
F. H. Todd, Esq.
Dear Sir:
Your favor of March 4th did not reach us until the afternoon of the 15th - owing to a delay of overland trains. Mr. Pike having previously written that you expected to be present at the Omaha meeting, we have waited to hear from Mr. Fox, who was then on the way. If you came, Understanding his telegram that you are at Omaha he has probably answered your inquiries fully - as he had the accounts ___ the matters you speak of. By the Feb. account you will notice the need of the balance in January acct referred to in your letter. The account of debts existing prior to January 8th, when F. W. Pike turned over the affairs, has been much greater than supposed from  inquiry and examination at the time.
We are anxious to and shall transmit every dollar as fast as proceeds permit.
Hoping you have learned from Mr. Fox the information desired.
___ [Yours & ?] Fox & Kellogg

F. W. Pike - there are many references to a Fred A. Pike but I didn't find a F. W. Pike in Calais, Maine, or St. Stephen, New Brunswick, not that there wasn't one. Perhaps F. W. Pike lived out of the area.