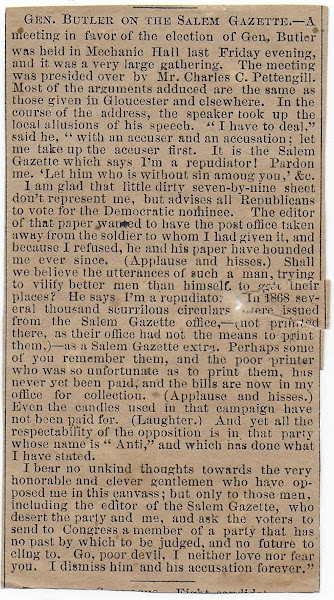 Circa 1870 newspaper clipping pasted into a ledger turned scrapbook, wherein Gen. Butler derides the Salem Gazette newspaper and its editor, presumably then Caleb Foote (1803-1894).
Gen. Butler is Brigadier General Benjamin Butler (1818-1893), a controversial general in the Civil War, known as "Beast Butler" by Southerners.
Butler started his political career as a Democrat and voted for the nomination of Jefferson Davis for President in the 1860 election. He later became a Republican and represented Massachusetts in Congress from 1867-1875 and from 1877-1879 and, after returning to the Democrat party, served a year as Massachusetts Governor from 1883-1884. He again left the Democrat party and became the presidential candidate of the Greenback Party in 1884.
The clipping appears to reinforce the fact that Butler relished a dust-up.
Charles C. Pettengill - perhaps Charles Coffin Pettingell (1822-1901)
GEN. BUTLER ON THE SALEM GAZETTE. - A meeting in favor of the election of Gen. Butler was held in Mechanic Hall last Friday evening, and it was a very large gathering. The meeting was presided over by Mr. Charles C. Pettengill. Most of the arguments adduced are the same as those given in Gloucester and elsewhere. In the course of the address, the speaker took up the local allusions of his speech. "I have to deal", said he, "with an accuser and an accusation; let me take up the accuser first. It is the Salem Gazette which says I'm a repudiator! Pardon me. 'Let him who is without sin among you,' etc.
I am glad that little dirty seven-by-nine sheet don't represent me, but advises all Republicans to vote for the Democratic nominee. The editor of that paper wanted to have the post office taken away from the soldier to whom I had given it, and because I refused, he and his paper have hounded me ever since. (Applause and hisses.) Shall we believe the utterances of such a man, trying to vilify better men than himself to get their places?  He says I'm a repudiator. In 1868 several thousand scurrilous circulars were issued from the Salem Gazette office, - (not printed there, as their office had not the means to print them.) - as a Salem Gazette extra. Perhaps some of you remember them, and the poor printer who was so unfortunate as to print them, has never yet been paid, and the bills are now in my office for collection. (Applause and hisses.)  Even the candles used in that campaign have not been paid for. (Laughter.)  And yet all the respectability of the opposition is in that party whose name is "Anti," and which has done what I have stated.
I bear no unkind thoughts towards the very honorable and clever gentlemen who have opposed me in this canvass; but only to those men, including the editor of the Salem Gazette, who desert the party and me, and ask the voters to send to Congress a member of a party that has no past by which to be judged, and no future to cling to.  Go, poor devil, I neither love nor fear you. I dismiss him and his accusation forever.

If you have information to share on the men mentioned, please leave a comment for the benefit of other researchers.
Posted by Pam Beveridge at 7:38 AM